Need Of The Hour—Protecting The Planet 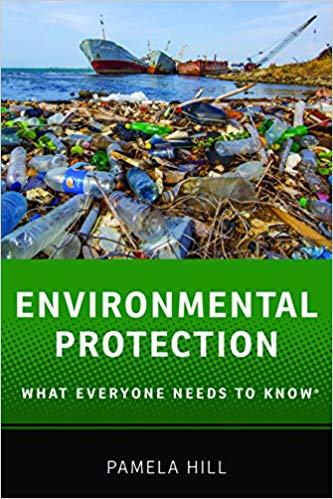 Need Of The Hour—Protecting The Planet
Atmaja Gohain Baruah
ENVIRONMENTAL PROTECTION: WHAT EVERYONE NEEDS TO KNOW by Pamela Hill Oxford University Press, 2018, 266 pp., 1340
July 2018, volume 42, No 7

The canvas of studying the environment is extensive and multidisciplinary. Given its multifarious aspects, addressing the subject at length is not an easy feat. Pamela Hill attempts to answer pressing environmental concerns by addressing the science behind ecological issues, environmental laws and treaties. By adopting an interdisciplinary approach, she connects environment to economics and politics, putting forth arguments which explain why conserving the environment is the utmost need of the hour. To clarify the assertions further, the author uses examples from history as well as addresses some highly debated contemporary issues which throw light on how the international community, especially the United States, is trying to unravel the science behind environmental protection.Sweeping in its research, the book delves into the concept of sustainability and its three components—environmental, economic and social development—and looks at them as mutually reinforcing pillars. The book has examined environmental laws and the emergence of environmental justice, increasingly recognized by governments, scholars and international tribunals, as distinct legal domains. The author, being a lawyer at the US Environmental Protection Agency (EPA) and having directly dealt with various EPA supervisory activities, is best suited to write about the environmental issues facing us today. She informs the global community about how environmental protection can be sustained through fairness and justice, particularly in the context of using economic tools to address environmental issues. Her suggestions are very pertinent to the present scenario wherein controlling the global temperature from soaring high is a national priority for every country. As a prolific environmental law practitioner as well as a lecturer of environmental law, the author puts forth well-formed arguments on how the responsibility of protecting the environment is global, irrespective of being a developed or developing country.

Pollution can be in a multitude of forms and Hill expediently points that out by giving an overview of the various forms of pollution, ranging from air pollution, to noise, light, water and nano-pollution. According to her, reversing the effects of climate change is not possible now, but what can be done is adopting new cleaner practices and mitigating the severity of pollution. While arguing against the climate change deniers, the author correctly provides reference to the National Climate Assessment done by the United States and the evidence it has raised against the deniers. Drastic climate change is indeed inducing water scarcity in already drought-burdened areas like the Middle East, while inversely inducing floods in already flood-ravaged countries like Bangladesh. Such areas become a breeding ground for political unrest as extremist groups use this as their propaganda and as a tool to threaten national security. To take a case study in point, it was found using NASA satellites that Syria lost tons of water in the 2000s due to dwindling rainfall and abysmal water management policies. Even if one does not directly link Syria’s severe water scarcity to the vicious conflicts which ensued, one cannot help but concede how the country’s routine experiences with water-related calamities have together played a crucial role in precipitating revolt and violence in the region.