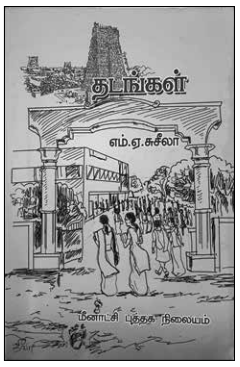 Thadangal is the second novel by MA Susila who has published several collections of short  stories and critical essays. In addition, she is an acclaimed translator. Her Tamil renderings of the legendary Fyodor Dostoevsky earned her many prestigious awards. She was a former Professor of Tamil and a committed activist for women’s issues in Madurai.

Feminism as a movement continues to be indigenous, despite its pervasive impact all over the world. In Thadangal, the narrator Sindu looks back at the three decades she spent as a Professor of Tamil and an activist in a leading women’s college in Madurai. From the seventies to nearly the end of the nineties, feminism as we come to recognize it, was taking its baby steps in many parts of India towards a definable movement. It was a time that did not enjoy much institutional or legal support, nor was it equipped with a well-developed feminist vocabulary that could help women identify their problems and articulate their feelings in a way that would find an instant recognition in the eyes of the media or the general public. Given its rigid caste structure and a  conservative family set-up, even the few women in Tamil Nadu who contributed to a breakthrough in higher education, and professions, had still  to contend with the rigidity of regressive forces and social mores masquerading as ‘tradition’ and ‘custom’.