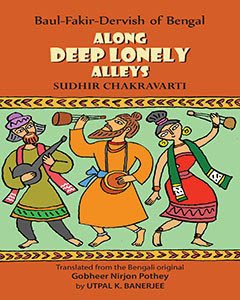 During the entire decade of the 1960s, Sudhir Chakravarti traversed the space covering Nadia, Bardhaman, Birbhum and Murshidabad in this Bengal and Meherpur and Kusthia in the other Bengal (Bangladesh) comprising countless villages to look for so many hidden meta-religions as practised by wandering minstrels who are known as bauls, bairagis, dervishes, fakirs, sahajiyas and udasins. Cutting across tiny hamlets and settlements tucked away in the farthest corners of Bengal he completed an intensive research and the result was his much-acclaimed book Gobheer Nirjon Pothey. The present volume under review is the English translation of that book and we need to congratulate Utpal K. Banerjee for the wonderful job he has done and for providing the base for a much wider readership.

After looking for folk religion and folk music in villages for years together, tracing the vanishing sects and sub-sects and trying to find the truth in the followers’ devotion, Chakravarti came to realize that it was in part a conundrum, quite a bit of a ploy to fool the ignorant urbanites; but if one could strike the right person (knock on the right door), one could be rewarded with more than what one had expected.

For this purpose, it was essential to learn their symbolic language, to develop the ability to distinguish between ‘education’ and ‘conversion.’ But how did all this begin? If proper accounts were taken, it was seen that in the late 18th century, a very large number of lower-caste Hindus and poor Muslims gave up the larger Hindu and Muslim communities and joined the Baul and Fakiri religions in eastern and northern Bengal. The torture by Hindu fundamentalists and the onslaught of casteism led these groups of simple, illiterate and downtrodden villagers to follow the simple words of alternate religions. These sub-religions, which identified man as the supreme being and saw the Almighty among the mass instead of restricting it within the walls of a temple, gained popularity and thrived for years in the hamlets of Bengal. They were answers to the upper castes. Theirs was the philosophy of rustic life expressed in the most humble words of religious leaders and was in contrast to the glorified verses of Vedas and Puranas. It was also noted that the deserters from Islam were very large in number. Lalan Shah and many ascetic religious leaders attracted several common men to their sub-religions through their honest living style, secular ideals and unitary thinking systems.

The simplicity of thoughts and the lucidity in expression helped these sub-religions to attract the masses. The most important feature of the bauls and dervishes was that they accepted people from all religions and looked down upon none. These religions taunted casteism, Brahmins and Brahmos. ‘Whom do you discard as the lowly men?/Perhaps Braja’s Krishna in their den/Calling them “sudra”, “chanral”, “bagdi” has had its day/And will now fall in total decay/Their usage would die as we say, this is our ken.’ This religious syncretism is something unique because whether we admit it or not, this was an empowering factor for folk religion. These folks did not quote scriptures at every turn of phrase, but had a world of beliefs of their own. Lust and violation were equally confessed or accepted and condemned respectively. In the theory of folk religion, there was more logic than emotion, because those who professed such faith had to constantly refurbish their ideology with logical arguments. Those who were converted to such faiths were also to be convinced with logical points.

In this book Chakravarti also assimilates the views of different intellectuals who wrote about the history and the reason for the dwindling number of these sub-sects over decades. Many of these historians relegate these alternate religions to mere distorted and demoralized practices. But Chakravarti tries to find the essence of these decades-old beliefs, or superstitions to the modern world, and creates a platform for argument on the authenticity of the humble rituals in the light of changing times. During his arduous walking tours and innumerable visits to fairs and festivals he picks up vital information and tries to understand the nuances of their use of symbolic language. He interacts with the stoic singers and the worshippers of dervishes to delve deeper into their philosophy and find the ‘real man’—‘The one who knows the secret of one’s birth/Knowing about all splits: is peerless on earth/Semen, seed and sap combine/To create this body of mine/Not knowing One who creates, conserves: I’ve no mirth!

The role of women or the feminine gender in their belief is also interesting. Instead of abhorring them, the woman is the partner to their meditation: for bindu-sadhan (reaching the ultimate goal or the pinnacle of mediation) is attained through a raser viyen—‘cooking’ the sap of life to perfection.

The author ultimately realizes that the invincible folk forms of those sub-religions can never be vanquished by civilization, politics, science and scriptural dominance. This well-researched book helps us to follow the deep lonely alleys, to understand the obscure mysticism of the mendicants’ songs and the nuanced bends in their train of thoughts and philosophy through its simple and lucid narrative style.