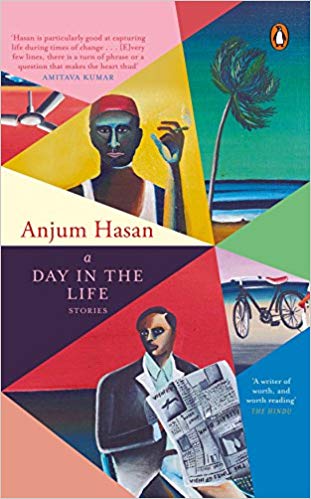 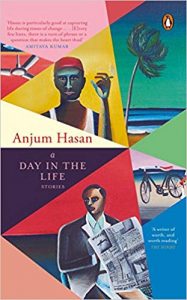 Anjum Hasan is exceptional. The imagery in her stories comes at you so fast that you gasp as you try to absorb it all—and every image is familiar—but in her stories they become poetry: ‘The phrase that comes to mind is–bursting into life. But spring is a gradual unfolding: day-by-day colour seeps back into the land, expressed in crocuses of lilac and gold. The oaks will fatten with leaves by slow degrees. Will they burst into life? Will the buds on the apple trees?’

Open any page, and read any paragraph—the lucid beauty of her language will whet your imagination. ‘She was chatting with a haggard, smiling man, the seller of a pushcart full of white chrysanthemums, pink begonias, red impatiens and the single, yellow, limp-necked rose in a mud-streaked pot that her mother thrust at Gulfam.’

But her stories offer much more than just the language. Each character is etched sharp; so in the short space of a few pages you get to know each person deeply. A mother whose son is moving away from his adopted country to his native one. The son, ‘…shy of the mother who is both more and less than a mother.’ A young newly wed girl in a misty, rain-filled world who is suddenly ‘…looking into his familiar eyes and feeling she doesn’t really know (her husband).’ A World War II batman who wants to throw a lavish party in memory of his English Captain, seventy years after the war is over. A young Luftan Mian walking to Benares with an older friend, in anticipation of acquiring the famous Benarasi sari for Mumtaz, his bride to be, who lives ‘Somewhere on the blank horizon, beyond the small jheel they can see shimmering before the slowly rising sun.’ Anjum Hasan’s writing is powerful.

Even when she speaks of old, decrepit spaces, bringing the picture up sharply before the reader, her language remains uncontaminated. ‘The tiles, muddied by decades of monsoons, are drooping over the awnings, and the wooden posts holding the roof up over the veranda are bent and sagging like damp matchsticks.’

Every now and then, a particular turn of phrase will amaze you. ‘What form would thoughts take if we didn’t allow them words?’ Or, in my favourite ‘Yellow Rose’, ‘…she was, on the uncomfortable screw-down metal seat, pinched between Mathew’s irony and her mother’s sincerity…’

Sometimes her writing will make you laugh. ‘Those men and women one sometimes came upon, punching their decade-old cell phones with exaggerated force and care and then pressing them tight to their ears and hollering into them as if communicating with spirits from outer space.’

Some themes recur—like loneliness—as much in the elderly as in a young medical student or a chronically ill young statistician, who finds an unlikely friend in the maid coming in as a replacement to her usual help. Like the rain—which seems to be a character in itself, with a life of its own; and the mist. All the characters however, seem to have one common concern—a disquiet with their world. Of something that does not allow them to be at peace—almost as if they are outsiders in their own spheres; in their own homes. All human beings have foibles, some exaggerated. Ms Hasan’s stories point them out without derision, making us look within.

There is a subtle reference to the political happenings around us—people stabbing and killing each other with very little provocation. An allusion is made to the Prime Minister who is going to clean up the mess in the country. There is an indication of caste by two men who have assaulted a waiter for his delay in taking their order— ‘…we’re Kshatriyas… You know, the Warrior caste?’ A retiree from the city to a small town is unwittingly caught up in a religious protest march while the pharmacist says—it is all politically motivated.

The stories are largely based in Bangalore and other parts of Karnataka, with a few exceptions, in Delhi and in a little town in Sweden. The protagonists—both male and female belong to various social strata and age groups; of different faiths, like best friends Rebeka and Nur. The author’s voice speaks through each character authentically, steering determinedly clear of clichés and stereotypes.

The writing is original and refreshing with fourteen stories, perfectly crafted, and told with no hint of romanticism. Sometimes you can get to learn a new word: detritus.

Every story may not appeal to everyone; two stories were not as riveting as the rest for me; but as in all collections, each reader will have his or her favourites. Mine are, ‘The Lady With the Dog’, ‘Sisters’ and ‘Yellow Rose’.

Malati Mukherjee is a writer, a translator and sometimes a poet, based out of the Nilgiris.