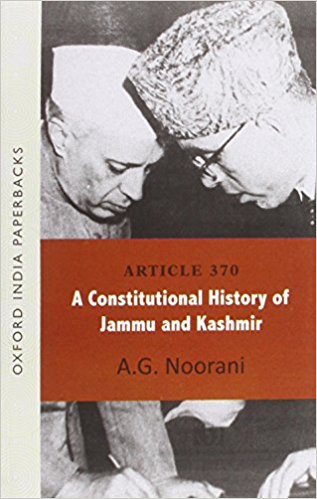 The question of autonomy for the State of Jammu and Kashmir has been mired in myths and misconceptions. In the six decades since the adoption of the Indian Constitution, few provisions of the document have been as misunderstood and contested as Article 370. The Sangh Parivar and its associates have for long demanded the wholesale abrogation of the Article, which they claim inhibits the ‘complete integration’ of the State with the Indian Union. Radical champions of Kashmir’s cause curiously echo this position in viewing Article 370 as bogus and irrelevant. The more mainstream and moderate position amongst Indians sees the Article in a more favourable light: as an example of India’s flexible and accommodative approach to Kashmir. A.G. Noorani has for long argued against all three positions. A lawyer and publicist, Noorani’s engagement with Kashmir goes back to over five decades. He started out as an advocate of plebiscite in Kashmir. Following Pakistan’s attack on Kashmir in 1965, Noorani, like other proponents of plebiscite such as Jayaprakash Narayan, deemed the idea as no longer feasible. In the years since, he has called for the grant of meaningful autonomy to the State. Throughout this period, he was also an associate of Sheikh Abdullah-a statesman who he rightly felt had been grievously wronged.