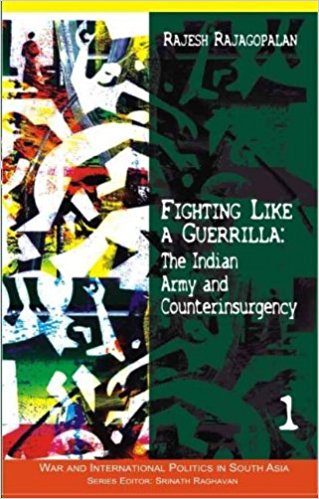 Methods of Warfare
S. Kalyanaraman
FIGHTING LIKE A GUERRILLA: THE INDIAN ARMY AND COUNTER INSURGENCY by Rajesh Rajagopalan Taylor and Francis Group, 2008, 217 pp., 595
October 2008, volume 32, No 10

In the year 512 Before the Common Era, the Persian Emperor Darius, ruler of the largest empire and commander of the strongest army in the world at that time, failed to subdue the Scythians who adopted what we would describe today as guerrilla warfare. The limits of Napoleon’s military power were first demonstrated by guerrilleros in the Iberian Peninsula—a problem that the great conqueror described as the ‘Spanish Ulcer’. During the Cold War, both superpowers failed to win against their weaker guerrilla opponents—the United States in Vietnam and the Soviet Union in Afghanistan. And so have regional powers like India and Israel failed to win against guerrilla forces in Sri Lanka and Lebanon, respectively. How does one explain the failure of such strong empires and states to defeat weak, comparatively poorly organized and inadequately resourced guerrilla forces? In his record of Darius’s failed attempt to conquer the Scythians, Herodotus captured the essence of the problem that confronts conventional armies when faced with guerrilla resistance.

The rebels possess neither cities nor forts, they carry their dwellings with them wherever they go, they are accustomed to shooting from horseback, their livelihood is not based on agriculture but on their cattle, and their wagons are the only houses that they possess. Under such circumstances, Herodotus wondered, ‘how can they fail of being unconquerable, and unassailable even?’1