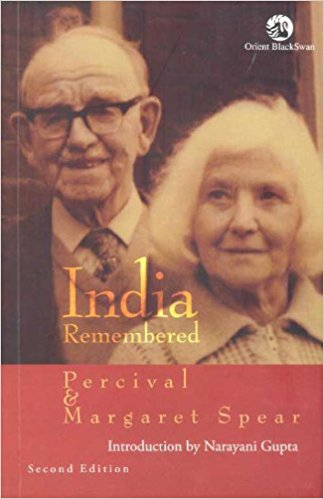 After a gap of many years, Margaret and Percival Spear returned to India to recall and reflect on the life they had to­gether spent in this country during the twenties, the thirties and half the forties of this century. The two remember India with a whiff of nostalgia and tell their story in a language that is soft and mov­ing. ‘Reminiscences’, they write in the Preface, ‘could not only record events but could also describe something of a vanished world. Who would believe today, for example, that the New Delhi of the thirties was one of the quietest, most spacious and traffic-free cities in India, that the Delhi of the twenties was still in essence an old-world provincial city, with a sprawling but empty suburb to the south, and a cold weather incur­sion of ‘high-ups’ to the north, longing to escape from their tents and temporary quarters to the coolness of Simla each March-April’. The Spears had indeed loved their India—with Percival trying to keep pace with the mad swirl of events following Gandhi’s release from jail in 1924, and with Margaret watching the everyday drama of human life ‘set in a frame­work of flowers and trees, birds and animals’.

I enjoyed reading India Remembered, but as I drew close to the end, a sense of unease overtook me. I could not locate the exact source of this unease, but the question which bothered me was some­what like this: ‘The Spears have their memories and they relate them to catch something of a vanished world to pass it on to others. But who amongst their own countrymen would care to listen to—let alone appreciate—their story?’

Those among their own generation who came to India, Percival himself writes, ‘will slough off the Indian ex­perience as if it had never been’. And the younger ones, those born in the post­war years, can hardly be expected to retain any personal bond with India. Apart from a few droll informations hastily picked up from their textbooks, the young Britons exhibit an indifference towards India that is truly appalling. If England, as Seely said, acquired’ India in ‘a fit of absent mindedness’, then it could as well be said that England parted from the East in a state of permanent amnesia. Of their island’s past connec­tions, spanning over two hundred years, what do the present day Englanders care for? ‘Kundalini’ said one grissly-looking young man dipping his beard in cold tea. In Oxford street I saw dancing troupes of shaven-headed devotees of Krishna­consciousness. But all these esoteric cults in Britain have sprung up as offshoots of Yankee culture. None’ of them can be considered as locally pro­duced. Nor can the campaign of ‘Paki­Bashing’ (described as an expression of racial hatred of the British youth) be taken as intrinsic to British culture. In a recent case of murder of an Asian youth, police discovered Nazi insignia in the possession of the two accused teenag­ed skin-heads (Statesman, February 16 1981). This again illustrated that their inspiration to commit this gruesome crime came from across the English channel again not indigenous.

The genuine sapling of modern British culture, I have always believed, was sowed and nurtured by the middle-aged men and women who survived the hor­rors of two world wars. Having lost their dear ones and facing an uncertain future, they developed a hard exterior. They came to distrust their own feelings so that they could keep up a stiff upper ­lip to all strangers. At the same time being helpless, they extended help to others. Together, these two elements produced a mixture of racial exclusive­ness and Christian charity. The mixture bas not entirely died out; occasionally, one still finds a few odd specimens. Once I was travelling in a suburban train across the wild valley of Yorkshire. As I wanted to get down at a small station where the train stopped for a few seconds, I was anxious not to overcross my mark. I looked around and found an old lady sitting in another part of the compartment. I went upto her and politely asked if she would know after how many stops the train reached ‘x’. The lady looked up with a visible frown on her face which at once made me aware of the mistake I had committed in talking to her without a proper intro­duction. She mumbled something and I returned to my seat very crestfallen. As I began resolving that I should never again approach a stranger in Britain, the lady came up and handed over a sheet of paper. I found in it the names of all the stations spelled out in neat handwriting. ‘I have written this down for you to get to the place you mention­ed’. I thanked her profusely. Her wrinkled face was lit up with the flow of Christian charity. But it was a short-­lived glow. A few stations later as she gathered her things to depart she turned round and said, ‘I hope you read English’!

It was with this blend of racial ex­clusiveness and Christian charity that forced little Englanders to go out and establish a world empire. The British came to govern their colonies with the ‘milk’ of paternalism flowing to the brim, but they took every care not to mix with their wards lest it corrupted their own character. Hence, in all Indian cities they built cantonments to fortify and insulate themselves from contamina­tion with the seething mass of dark and unruly savages!

The British also boasted that by ad­ministering-and thereby serving-others they would impart enlightenment, edu­cation, new technology and lessons in self· government to the latter. Nobody enquired what the British in turn could learn from others? Export of British values, like the cotton textile of Manches­ter, was considered good enough for the colonies; but nothing in the culture of others was worth importing to ,Britain because anything foreign was surely to disintegrate British culture. Of such stuff—alas—the empire builders were made.

Perhaps the Spears, like a handful of others, are an exception. But even Per­cival concludes his part of the story on the assumption that he came to impart western values to the Indians. ‘And there has been’, he sums up, ‘the deep satisfaction of having, as I believe, helped in some degree in introducing the real values of the west to the Indian mind … Those values I would call chiefly the Christian personal and social ethic, the positive idea that the spiritual values are properly expressed in material and social inquiry and scientific ethic of objective forms and the weighing of results, of pre­cision and patience and of devotion to the truth’.

As school boys in the period of the Second World War, we too were told by our teachers that the British stood for idealism, upright character, patience and punctuality. Percival—though perhaps unwittingly—projects the same into the minds of his Indian readers.

From their Indian experience, the Spears had carried home many ‘intan­gibles’ which make them reflect on any­thing Indian with gratitude and sym­pathy. But, being English, they still remain exclusive; very much as survivors of a Vanishing species.

Yet, this notwithstanding, husband and wife have written a most entertaining book. In their ‘Odyssy’ across the time­-barrier, they have gathered and bunched together a number of tales and anecdotes. Some of them, especially in Percival’s section, border almost on the hilarious. Some samples: of St. Stephen’s, Percival relates the custom of students skipping classes as a matter of routine; the annual cricket contest between St. Stephens’ and Hindu College which ‘was more of a gladiatoral show than a game’, the case of the eloquent teacher who ‘regularly worked himself up into such passion that at his conclusion he staggered backwards into the supporting arms of adjacent pro­fessors’, and the young philosopher who sat in the staff room apparently immersed in meditation and when asked what he was thinking about would reply, ‘Trying to think of nothing’

More amusing are the tales connected with the Christian ‘Brotherhood’ and ‘Sisterhood’! Of the ‘Brothers’ Percival writes: ‘The Brothers, appeared to dis­like each other and disapprove of the college men; the college men fretted against Brotherhood rules and brotherly fustiness; we all hated the food but couldn’t say much because the cook was a Christian.’

The ‘Sisterhood’ of Anglican women was torn into two rival camps on the issue of wearing a bonnet, strings or no strings. Hence the ‘right and left wings’ in the ‘Sisterhood’ could be identified by the sign of the bonnet and the veil.

Historical or not, some of Percival’s sketches of the officials and politicians of his time are matchless. About the ICS ‘wallas’ he writes that ‘their minds tended to run in grooves; with a certain lack of the large imaginative sweep.’ His brief description of Jinnah, is a pure gem: ‘His voice was quiet, his gestures few, his manner Olympian and aloof as if he was surveying a world of insects or distastefully prodding with a needle some lifeless scientific exhibit.’ And here is the fiery Bengali, K.C. Neogy. ‘Whenever ‘KC’ disapproved of a ruling of the president of the Legislative Assembly, he would bound out of the Chamber with great strides as though he had springs on his feet. He later joined the Nehru Cabinet, but found the Prime Minister as unbearable there as the As­sembly President had formerly been. So he bounded away in retirement.’

Compared to Percival’s, the part writ­ten by Margaret flows like the serene water of the Ganges. Too many people, events and thoughts crowd in to accen­tuate the spiritual character of India. Margaret takes pleasure in telling the story of a sadhu who, she believes, really brought back the sight of a blind child. Well, one may doubt but need one be choosy reading a book that offers sheer delight?