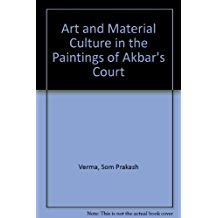 This is a source-book for those who wish to obtain specialized information regarding the material culture of Akbar’s times. It is not a book that one expects to complete at one reading, but is more in the nature of a reference book, aiding such of us as would wish to verify whether, for example, a kettle-drum of a particular type was known in Akbar’s days or if flutes of a specific variety were then in vogue. Som Prakash Verma is a Lecturer in history at the Aligarh Muslim University and this book is a revised edition of his doctoral thesis. Verma has painstakingly studied miniature after miniature, culling information regarding the exact shapes of utensils and wine cups, the different varie­ties of musical instruments, the nature of costumes, the precise types of arms, armour and so on. As the author tells us, such details are not available from official chronicles or other historical accounts, while the miniatures offer evidence about a variety of objects that a chronicler would normally not deem worthy of report.[ih`c-hide-content ihc_mb_type=”block” ihc_mb_who=”unreg” ihc_mb_template=”1″ ]

One can see that the book is the result of a great deal of research and analytical work; the information thus collected has been set out in a series of eight chapters devoted to these various subjects and catalogued under specific sub-headings. The sketches illustrating the various types of headgear, clothes, shoes, utensils, of drums, pipes, daggers, axes, etc are of great value in enabling us to pic­ture the objects listed and described.

It is a pity that Verma did not add a concluding chapter which could have given us a readable and comprehensive picture of all the detailed information that has been so conscientiously collected. Such a chapter would have been most useful as it would have pieced together the social milieu as well as a cultural picture of the period—a picture which does not emerge from the book as it now stands.

The first chapter is a readable account of the style and technique of the miniature paintings of Akbar’s times. It discusses how more than one artist worked on a painting; it comments on the multiple perspective used by the painters; and considers the reasons for the lack of proportion among different objects represented in a single scene. A series of 16 miniatures are included as full-page plates and one wishes that a few at least of these could have been in colour. Vikas Studio is to be congratulated for the striking cover design in silver, black and white.

Vidya Dehejia is Lecturer on Indian Art, Delhi School of Planning and Architecture, author of Early Stone Temples of Orissa.