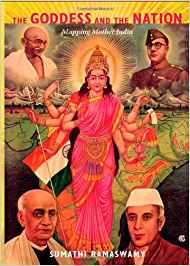 The Goddess and the Nation provides a timely, if somewhat troubling re-minder of one strand within the

nationalist movement, tracing its development primarily through a study of visual representations of Bharat Mata, a deified mother India, and her children, especially her sons. Lavishly illustrated and annotated, it carries the reader through over a century of colonial and postcolonial history.

Ramaswamy’s entry point is at once dramatic and traumatic—focusing on the various representations of Mother India in the work of Maqbool Fida Husain, drawn from the turbulent decade from 1997 (marking fifty years of Independence) to 2006, and the responses to them. This provides the setting for a detailed discussion, where closures are distant dreams—instead, we are introduced to complex and fraught histories of the making of visual imagery, and the many ways in which these could be and were appropriated and discarded.