Making a Text and a Tradition Accessible 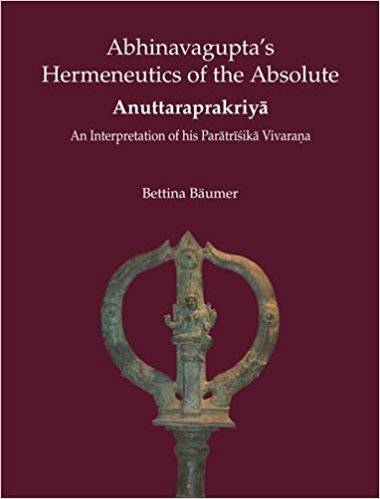 Making a Text and a Tradition Accessible
A.N.D. Haksar
ABHINAVAGUPTA'S HERMENEUTICS OF THE ABSOLUTE: ANUTTARAPRAKRIYA- AN INTERPRETATION OF HIS PARATRISIKA VIVARANA by Bettina Baumer Indian Institute of Advanced Studies, 2011, 332 pp., 1000.00
December 2011, volume 35, No 12

Abhinavagupta is an important name in Sanskrit literature and Indian philosophy. Most of the serious writings on these subjects mention at least three of his works. One is the encyclopedic treatise on Kashmir Shaivism, the Tantraloka or Light on Tantra. The other two are path-breaking commentaries on fine arts: the Abhinava Bharati on Bharata’s Natya Shastra and the Dhvanyaloka Lochana on poetics. But such texts are little perused today by those other than specialists, and their author remains virtually unknown to the growing public readership interested in ancient Indian culture. The book under review is intended to improve this perspective. ‘Abhinavagupta,’ says its writer, ‘is one of the most extraordinary figures’ in the domain of Indian philosophy, aesthetics and mysticism. ‘It is high time,’ she continues, ‘that his genius got duly recognized beyond the area of his origin and language. For this we need translations of his works and studies which make him accessible outside.’ While Abhinavagupta’s ‘aesthetic theory, based on the Natya Shastra, has become an indispensable method to apply, not only in drama and poetry, but in all fields of the arts, especially music….there are few authors, even in the Indian tradition, who…. combine such an enormous range of subjects and fields with the depth of mystical experience and philosophical insight.’ These words of the learned writer, a distinguished Austrian Indologist and professor of religious studies, are indicative of her effort to place her subject in a wider context. In the foreword to her book, another eminent scholar of India from France wryly observes that ‘Indian philosophers seem to be …fascinated by Sankara’s advaita as if it were the acme of Indian thought….which…it is not.’ This line of thinking is however not pursued in the present book which is an interpretative study of ‘one of the most mature and difficult’ Sanskrit works by Abhinavagupta.