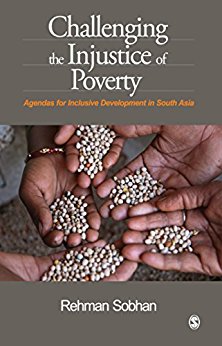 South Asia is the second fastest growing region in the world after East Asia. This growth has reduced poverty rates but they have not fallen fast enough to reduce the total number of the poor. This is despite growth being complemented with various poverty alleviation programmes. The number of people living in poverty has actually increased and South Asia has the largest number of people living in poverty in the world. It has nearly 600 million people living on less than US $ 1.25 a day more poor people than SubSaharan Africa. Why does South Asia have so much poverty despite growing economies and many poverty alleviation programmes in place? Rehman Sobhan attempts to answer this question and suggest a possible way forward. Poverty is a subject that has been in the academic debate for long years. It is now an accepted fact that growth alone is inadequate to address the problem of poverty. The international community has recognized this fact and their development assistance today is in one way or another linked to poverty alleviation.

The recent initiatives such as PRSP (Poverty Reduction Strategy Paper), MDGs (Millennium Development Goals), etc., reflect this, but Sobhan argues that increased resource flows under these programmes to combat poverty may not be effective unless policy makers address the structural sources of the problem which create and perpetuate poverty. This is the key theme of the book.

The book is an outcome of six years of untiring work specifically on the subject conducted jointly by the Centre for Policy Dialogue (CPD), Bangladesh and South Asia Centre for Policy Studies (SACEPS), Nepal (as shown in Annex 3C of the book). In order to obtain the individual South Asian country specific poverty situation, studies were commissioned to obtain inputs for the book (as shown in Annexures 3A and 3B in the book). So the arguments developed in this book are an outcome of comprehensive research and extensive dialogue.