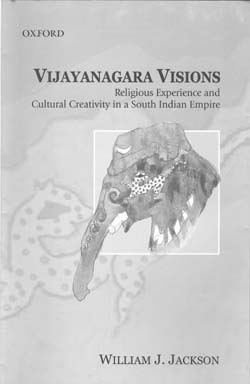 I would like to begin this review in Jackson’s own words: ‘It is true that the border crosser who writes about another culture is part beggar, part stenographer, part Sherlock Holmes, part patchwork quilt maker’ (p. 309). Sure, William Jackson may have been all these when he went around the ruins of Hampi and meditated on ‘Vijayanagara Visions’. However, for me this book has marked a milestone in my intellectual journey by enabling me to move from dichotomous notions of ‘us’ and ‘them’, ‘etic’ and ‘emic’ representations of societies, cultures and peoples. The fractal spiral and the ‘wholeness in cascading inter-relatedness’ (p. 41) which bhakti cultures share across centuries, a notion that runs like a thread throughout this longish narrative of Jackson’s, firmly and truly connects him to this fractal harmony.