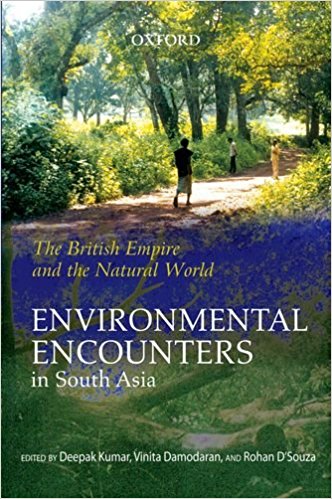 If it takes breadth of imagination and a grasp of geography to grapple with the enormity of the scale and consequences of the British Empire, the authors of The British Empire and the Natural World do it for their readers in one extended 91-word sentence. I reproduce here part of it: ‘If totalled as a single bloc from territories gained, held, controlled and lost over the course of almost four centuries, the flag of the British empire could be unfurled and drawn in the fashion of a near uninterrupted arc across the globe’. The essays contained in this volume are inaugurated with the declaration that the scale of investigation of the British empire’s environmental intervention and impact can be nothing less than global. The authors’ arguments are persuasive. Their introduction to the book is a sweeping gist of the ongoing evolution of environmental history, especially when one is burrowing into the history of landscapes that bear the footprints of British imperial ambition.

Earlier scholars have contended that far from reducing colonies to mere receivers of ideas transmitted from the metropole, the British empire displayed an inherent tension between thoughts and impulses that arose at both ends and travelled in opposite directions, frequently intersecting mid-way. At the same time, the empire sought to establish an ‘ecological regime’ across its colonies in the way plantations were raised, irrigation networks chiselled out, or game-parks erected for restricted hunting and conservation.