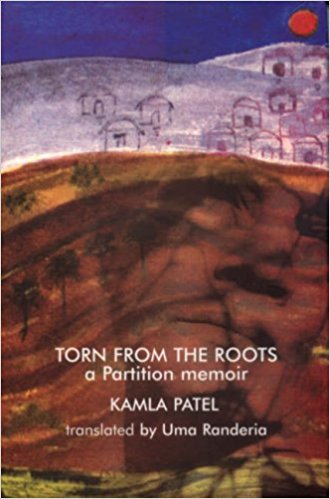 Kamlaben Patel’s Partition memoir, Mool Sotan Ukhdelan, the translator’s note tells us, is considered as a neglected classic in Gujarati. How much more creditable it is, then, to redeem it from the neglect of its original location, and make it available in English translation — Torn from the Roots! Because, given the sheer tide of Partition things in which we are drowning, after the silence of half a century, it isn’t easy for something to stand out. And yet, this modest memoir does. I must confess that my first reaction on being asked to write about yet another Partition book was, well, acute ennui. I expected to encounter the recycling of the same old clichés, not just the hallowed (and dusty) images that have been collecting in the seams of the allegedly creative writing about the Partition—the trains piled with bodies, the dismembered limbs, the wells choked with the bodies of women whose men preferred the women’s deaths to their own “dishonour”—but also the academic clichés about the nation-state and its necessary violence, or about secularism and its discontents.