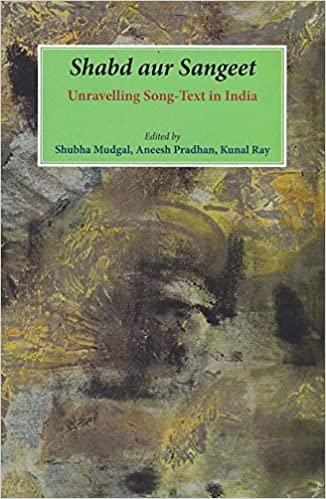 Following from Javed Akhtar’s lament in the Foreword to this volume, there is much to be said for re-focusing our collective attention on the shabd (literally, word) or the text as a proxy for language (and not just in music), as the richness, depth and diversity of the Indian linguistic tapestry appears to be getting obliterated, flattened and homogenized in a bad way under the hegemony of English. Indian English, one of our national languages, has a legitimate standing in its own right, with its distinct cultural idiom, vocabulary, constituency and literary output in written form. However, at most two hundred years old, it is an infant in the subcontinental linguistic history, which is not only much older but also much vaster, with output in a diversity of genres, both written and oral. Music is one arena where the shabd or the text is preserved and transmitted both through the written medium as well as through the oral repertoires of performers and teachers. Thus, shining a spotlight on parts of the massive and intricate linguistic landscape that characterizes the behemoth called ‘Indian music’ is an important and laudable project.

It is not surprising that this project was conceptualized and brought to fruition by two eminent musicians, who are also serious thinkers and scholars of music, in collaboration with a professor at FLAME University. They are the three editors of this volume, which is a collection of abridged versions of papers presented at a conference organized by the editors. The range of musical traditions covered by the volume makes it a compelling and informative read. The format of the book (shorter versions of academic papers) works well for the most part to convey the authors’ main arguments succinctly without losing the readers’ interest.