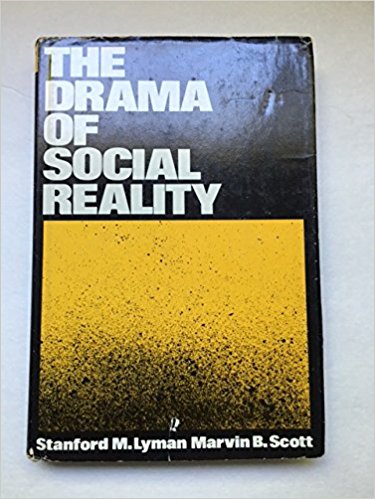 The thesis this book presents is based on Jaques’s speech in As You Like it, ‘All the world’s a stage’, which postulates the view that human beings in a social context are like actors in a play per­forming their parts, filling out their roles. ‘Otherwise put, reality is a drama, life is theatre, and the social world is in­herently dramatic’. The first section of the book is an approach to drama, in particular Shakespearean drama that might seem so obvious as to preclude the possibility of any originality. How wrong such a conclusion would be is discovered before one has finished read­ing the first chapter entitled ‘Macbeth’. Here the familiar themes of alienation, despair, and the absurd are applied to the play with a new slant, that of the sociological milieu in which the play unfolds. Macbeth is out of step with his society; the murder of Duncan causes him to lose touch with even the ordinary routine of life and he finds himself increasingly in a state of exile.

So far, so good. Not many will dispute the statement that life is itself a drama, and as the second section of the book goes on to ably demonstrate, that the politician, the negro slave of the last century, the bandit, the outlaw, the partners in an affair, and even the lunatic in an asylum are all acting their parts, projecting images of themselves that are different from their ‘real’ identities. The difficulty—which how­ever could have been turned into an advantage by Messrs. Lyman and Scott—with a thesis of this kind is that if all of life is a theatre and all events are scenes in a play, what, if any, is the reality underlying this theatre? Dr. Johnson, while defending Shakespeare’s violation of the unities of time and place, declared: ‘The truth is that the spectators are always in their senses and know, from the first to the last, that the stage is only a stage, and that the players are only players.’ The theatre, a realm of ‘let’s pretend’, derives its validity from our deep and abiding sense of life being reality.