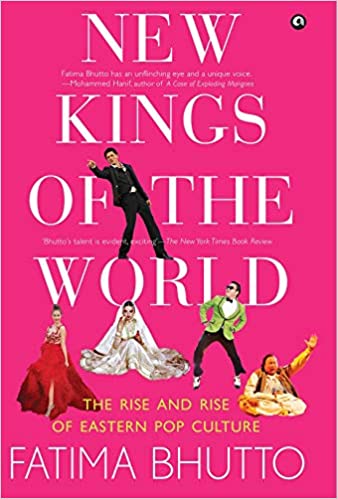 In 2019, the Aleph Book Company brought out an imprint of Fatima Bhutto’s freshly penned book New Kings of the World: The Rise and Rise of Eastern Pop Culture. They decided to wrap the hardcover meant for Indian audiences in a shocking bubblegum pink. And placed a smirking Shah Rukh Khan top centre, head askew, index finger pointing out at the reader, legs akimbo. A little below him to the left was a fetching image of Meryem Uzerli looking uncomfortably paparazzi ready. Rekha as Umrao Jaan, eternally coy, took up the centre. Psy Gangnamed away on an invisible equine to the right. Just above a bilious Nusrat Fateh Ali Khan readying to belch out that high note once again. All these stars fought for space with big white letters that made up the title and small white letters that made up blurbs praising the book and the author.

At first glance it seemed a messy, unnecessary cover. One more suited to the infotainment section of the Sunday rag than the book by Murtaza Bhutto’s daughter. But the messiness perhaps had a meaning. These ‘stars’ were finally emerging from the whiteness that had hitherto pervaded popular global acclaim.

Fatima Bhutto’s book is about entertainment and aspirations. But mostly it is about change. She addresses change while examining the rise of Eastern Pop Culture. Her book spans Anatolia to the Orient and reports with mixed success on the homegrown pop culture Juggernaut. And its effects on countries such as India, Turkey and Korea and the world. The book also serves as an introduction of these hugely influential film, television and music machines to the uninitiated.