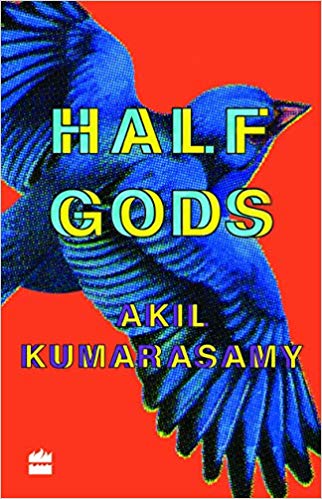 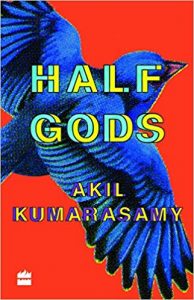 Every once in a while there comes along an author, whose expert fingers peel life like an orange, pulling apart the skin, deftly separating the clingy pith to reveal sections of the luscious fruit within. It is with such delicacy and skill that Akil Kumarasamy probes memories, experiences, pain and grief in her short story collection, Half Gods.

The interlinked narratives are primarily about exile, the desperation, the tremendous loss, and the everydayness of living with this agony. There is no escape from the deeply etched horrors of the civil war in Sri Lanka. ‘Why do a few sad events have to make a whole life unhappy?’cries Nalini. No one is spared. Not the grandfather whose life is one long remorse at leaving the country unscathed, not Nalini, his daughter, who escapes the country with her father after her mother and twin brothers are killed in riots, nor her sons Arjun and Karna, whose only misdemeanour is to be born to parents in exile.

The Sri Lankan Tamil history is one long story of uprootedness where death is the only certainty. Whether it is starved or scorched to death in their arid native land, bloated to death in the open sea, or the slow daily death in the ‘pungent hills’ of a tea estate. In the new world they are once again forced to ‘shed skin’and reinvent themselves. But it’s not just Sri Lankan. It is the immigrant experience. There is the immigrant from Bihar, Botswana, China, the Dominican Republic, each struggling to make sense of what life has dished up.

There is rawness to adolescence. All Arjun wants is to belong—a semblance of a normal life. But the family is dysfunctional—a grandfather, who has fled Sri Lanka but sets his clock nine and a half hours ahead to Sri Lankan time; an absent father, a mother whose sadness hangs heavy, colouring the walls. Nandini weds one brother but also beds the other. Her reason is innocent enough. ‘In Dilraj was Mohinder and in Mohinder was Dilraj.’ Then there is the younger brother Karna, who prays and waits for boons to be granted. Arjun is the protective older brother to Karna: ‘The world is not nice. You have to be prepared.’ Fiercely possessive of him, he warns aganist Karna of getting too friendly with his Sikh friend Gurmit for ‘no one likes him and if you hang around with him, no one will like you either.’ When he discovers them in a compromising position, he finds his feelings delicately balanced between jealousy, rage and love.

The grandfather with his ‘ring of sunspots on his bald head’ is both a mainstay and an acute embarrassment to Arjun. He feeds the brothers alternately on stories of mythology and stories of violence against the Tamils in Sri Lanka, keeping memories and through it, a sense of identity alive. A fun day at the beach with grandfather turns out to be mortifying, for grandfather simply refuses to understand the reason one needs to pay to enter a crowded beach full of bodies, whereas he had a whole empty beach to himself in Sri Lanka! All the while girls in bikinis are flipping their eyes at Arjun, whispering to their companions. A beautiful moment precariously poised between this here now and that then there!

Like in a labyrinth, stories lead into stories here. We hear about gentle Selvakumar whose mistake while picking tea leaves leads to a whipping with sugarcane until ‘all sweetness left him’ and he smells of ‘burnt molasses, his skin the sticky colour of beet’. There is Jegannath, the mild-mannered entomologist, who has trained his vision to ‘look for the miniscule’ so that everything else is blurred, until one day his tidy world is turned upside down when his son goes missing. The images are evocative and linger long after the book is done. A man’s head chopped and thrown up at the sky like a football; an old man returning to his village, to find just a big hole there; covered in feathers and chicken shit, a villager loudly bemoaning the loss of his chickens, taken by a rogue army: they were all the family he had had; the smell of thousands of books burning. The great fanfare with which independence is ushered in is a superb instance of irony, a promise of everything different and then the new prime minister’s appearance, mimicking the white man’s attire, speaking his language, baffling the simple workers.

Akil Kumarasamy has a precise way of handling emotions that leaves you hurt still wanting more. Only, in the last story of the collection she seems to falter a little, introducing twists and turns that tug at credibility. But, her’s is an authentic voice and she is definitely an author one needs to watch out for.

Sumitra Kannan, a freelance reviewer, has published in Deccan Herald.