About Real And Not-So-Real Princesses 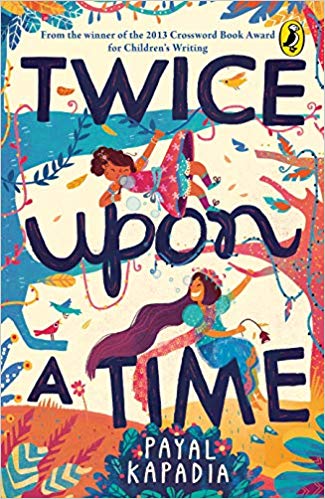 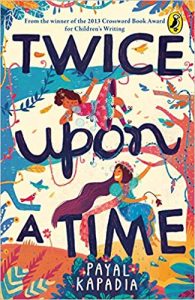 There is no getting away from it: the title Twice Upon a Time must be one of the best things that happened to children’s literature in a long time. Together with the inspired illustrations, funny and fecund, the title promises a romp that evoked, in this reviewer, dusty memories of settling down with a book in a quiet corner of the summer vacation, and surrendering to the bliss of being swept away.

Payal Kapadia is the winner of the 2013 Crossword Book Award for Children’s Writing and the illustrator Sandhya Prabhat has received considerable praise as well, and therefore it was with happy anticipation that I sat down to read this little book. The prologue augured well. Describing the first tantrum thrown by Princess Keya in the pink, palatial bathroom of Surya Mahal on the day she entered her teens, the writing is crisp, sharply visual and subversive. ‘King Ferrlip felt faint, and he reached for his jar of smelling salts’ is pretty priceless, as are the descriptions of the royal paratrooper sliding down the rope to the bathroom window, the royal lock-picker sticking a pin into the heart-shaped keyhole or the royal window-boy curling his toes around the rung of the ladder he is climbing up in reaction to the princess’s ear-splitting scream.

When the story starts to tell us of the execution of Keya’s plan to quit being a princess, up to her gills as she is with an acute ennui of the pink sameness of it all, Kapadia’s narrative loses some of its tang and fire. If the entry of Nyla, the prospective substitute princess, is meant to bring in the ordinary as a foil to the luxuries of the palace, and her reactions to the way things are done in the Mahal to function as a reality check, this strategy does not really work well. Even though her desire to get away from her brothers and her ambition to become a princess is nicely positioned, Nyla with her brown face and the cut-off jeans playing dragons with the brothers in her poor home is an outlandish creature: she does not fit within the geographical or cultural moorings of the Indian poor even if it is granted that this is not a homogenous population. Kapadia’s intention to be subversive soon morphs into a need to be politically correct. The queen doggedly knitting away her fiftieth sweater in order to qualify for the award that queens are conferred in this fantasy land, begins to play hooky. While her cravings for bubble-gum and bicycle rides are fairly funny, the reader has by now gauged the author’s feminist agenda, seen all too clearly in finale of the hungry vegetarian dragon, the timid cake-loving princes and the two brave princesses: real and substitute.

Though limited and niche, the Indian publishing industry for children’s literature in English appears to be doing well in recent times, with increasing numbers of Indian writers and books for children hitting the shelves. This phenomenon is apparent despite the stiff competition posed by the popularity of children’s and young adult fiction from the western English speaking world. While Kapadia’s offering is a welcome addition to the body of children’s literature written and produced in India, one may only hope that such literature in English, even if it is inclined to fantasy, does more than make only nominal references to upma and dosa, or ghaghra and choli, or indeed to a parantha-loving benign dragon. These references hardly obliterate the patchy influence of Carroll’s Alice seen in The Society of the Snobs in particular and the novel as a whole, nor does it help locate Kapadia’s story, such as it is, in any recognizable Indian region or culture. It is to be hoped that writing for children in India, even if it is in English, transcends the blurred cultural invisibility which is an effect of a rather meaningless cultural cosmopolitanism. Like literature anywhere, children’s writing too profits from a secure and confident rootedness in specificities.

Rohini Mokashi-Punekar is Professor at the Department of Humanities and Social Sciences, Indian Institute of Technology, Guwahati. She is the author of On the Threshold: Songs of Chokhamela (Altamira Press 2005 and The Book Review Literary Trust 2002), Untouchable Saints: An Indian Phenomenon (Manohar 2005) which she co-edited with Eleanor Zelliot, and Vikram Seth: an Introduction (Cambridge University Press 2008). She is currently engaged in translating medieval Varkari poetry from Marathi, an anthology of which will be published by Penguin in their Black Classics series and Jotirao Phule’s play Tritiya Ratna to be published by Orient BlackSwan.