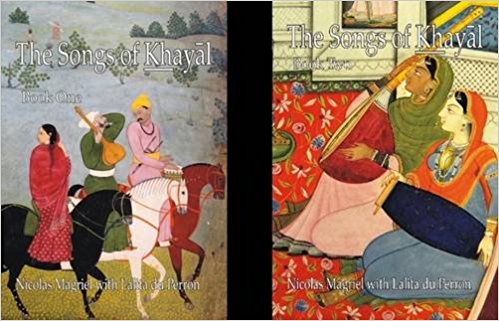 The work of years of immersion in Hindustani music, these two massive volumes are a very important contribution to the documentation and study of khayal, the preeminent genre of raga music that we recognize today as ‘classical’. The authors Nicholas Magriel and Lalita du Perron have made a selection from the repertoire of vocal recordings dating from the very early decades of the twentieth to the end of the century and which includes legendary 78 rpms and longer renditions on L.P., audio cassette and CD. Despite the circulation of recordings which made repeatability a virtue, the project to notate Indian music which had begun in the last decades of the nineteenth century continued unabated. In the bandwagon of enthusiastic notationists were British orientalists, civil servants, Indian nationalists, social reformers, vocalists and ethnomusicologists. Thus the project of committing music to paper became closely tied to the evolving history of khayal. The print format also gave the lyrics or the bandish a new status and much ink and opinion was expended on appropriate sahitya or literary values.

Book 2 gives us the lyrics and notations of about five hundred well-known compositions in a range of ragas. Using the latest software and taking into account the idiosyncrasies of vocal performance—the flourishes etc., these new notations will be welcomed by musicians, students, researchers and musicologists eager to check the contours of a composition. In a series of long essays in Book 1, the raison d’etre of the project is carefully explained and presented by the authors—khayal history, the logic of melodic development, the discursive terrain of the lyrics. There is a division of labour here—the music material is tackled by Magriel and the textual by du Perron.