Journeying on the Raft of Life 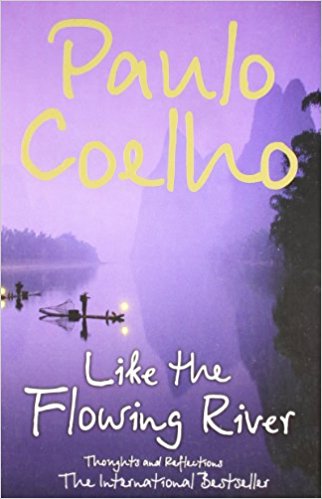 I would recommend Paul Coelho’s Like a Flowing River: Thoughts and Reflections if you are looking for (a) a book to carry on a journey, (b) a gift for a student achiever or (c) a mood-elevator. This is a compilation of 102 stories and articles published in newspapers around the world by one of the most widely read authors of recent times. Unlike some of Coelho’s earlier works (Veronika Decides to Die and Eleven Minutes, for example), Like a Flowing River can be read in spurts, without having to worry about losing the thread of Coelho’s philosophy on life. Coelho introduces his intention to ‘set himself on the same path as ordinary people’ in his preface. There is however nothing ordi-nary about Coelho’s inimitable knack of story-telling, which is simple yet simultaneously profound. He in fact uses the preface to make a tongue-in-cheek comment on the kind of writer he would rather not be. He is particularly not fond of the literary academy that celebrates density of style as a laudable quality:

Given his vast culture, a writer can always get work as a literary critic. In that role, he can show his generosity by writing about his friends’ books. Half of any such reviews are made up of quotations from foreign authors and the other half of the analyses of sentences, always using expressions such as ‘the epistemological cut’, or ‘an integrated bi-dimensional vision of life’. Anyone reading the review will say: ‘What a cultivated person’, but he won’t buy the book because he’ll be afraid he might not know how to continue reading when the epistemological cut appears (p. xiii).

The length of Coelho’s articles vary from a paragraph to four pages at the most, and his narrative style ranges from personal anecdotes to fables with didactic intent; and ‘do-good-feel-good’ inspirational stories to profound philoso-poetic reflections on birth, joyousness, forgiveness and death.

In keeping with Coelho’s fondness of the journey motif (The Pilgrimage/The Alchemist), a great many of the accounts are based on either his personal experiences or on stories other people have told him ‘while travelling down particular stretches of the river of (his) life’ (p. xiv). Another recurrent theme is that of the optimist belief in the role of God in our everyday lives (‘The Music Coming from the Chapel’/ ‘The Solitary Piece of Goal’ etc). Coelho’s appeal for a more secularist world is reflected in his inclusion of prayers for peace from the world’s religions in ‘Some Final Prayers’.

On more contemporary issues, Coelho worries that modern man has been programmed to follow standardized norms of behaviour (‘How do we Survive’ and ‘The importance of a Degree’). He is equally troubled by our obsession with making rules about everything (‘Of Poles and Rules’). We also have ‘Thank you President Bush’, published first in 2003 two months before the invasion of Iraq and reportedly one of the most widely published articles on the war, with a readership of 500 million. Coelho expresses his empathy with the thousands of anti-war protestors who gathered on the streets of Europe. He writes:

Thank you for allowing us—an army of anonymous people filling the streets in an attempt to stop a process that is already underway—to know what it feels like to be powerless, and to learn to grapple with that feeling and transform it.

So, enjoy your morning and whatever glory it may yet bring you.

Thank you for not listening to us, and for not taking us seriously; but we know that we are listening to you, and that we will not forget your words.

My favourite piece in the collection is ‘Books and Libraries’. Coelho explains that he makes it a point not to own more than four hundred books at a time (‘. . . why keep all those books at home? To prove to my friends how cultivated I am? To decorate the walls?

The books I have bought would be of far more use in a public library than in my house’). While he continues to buy books, he lets it go as soon as he has finished it, giving to either an individual or a library: ‘My intention is not to save forests or to be generous. I simply believe that a book has its own journey to make, and should not be condemned to being stuck on a shelf.’ He reminds those of us who are extremely possessive of our book collections that we are not likely to read many of our books again ‘because new, interesting books are constantly being published.’ Coelho therefore appeals: ‘Let’s leave our books free to travel, then, to be touched by other hands, and enjoyed by other eyes.’

Mala Pandurang is Head of Department of English at Dr BMN College, Mumbai. Her most recent publication is Chinua Achebe: An Anthology of Recent Criticism (ed.), Pencraft International, New Delhi, 2006.