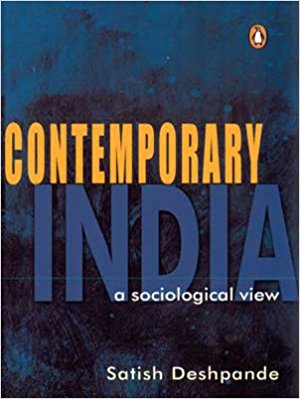 In this era of cross-cutting issues and research, claiming a particular expertise as one’s own may sound incongruous, but I cannot resist the temptation of confessing what I had always felt while reading Satish Deshpande and that is: reminding geographers that someone else is doing what they ought to have done. I not only enjoyed the most, but also used his earlier work on embedded spatiality even as globalization processes seem to be challenging the concept of spatiality because of ever-increasing transnational and diasporic narratives extensively in my teaching and research. Therefore, despite being a little apprehensive because of my academic background in geography, I took up the assignment of reviewing the book. I must say the initial sense of unease reduced further when I read what the author has to say about the ‘intended audience’ as ‘a non-specialist one, including the general reader ‘academics from neighbouring disciples, and students across the social sciences and humanities’ (page 18). This is a point I would come back to later.

The author in a self-reflective mood has undertaken a journey to explore the pitfalls of sociology as a discipline—arguing that as compared to other ‘’complex’ subjects requiring ‘specialized knowledge’ sociology has often been equated with commonsense of every day life and for this reason it has failed to inspire awe. He points out, however, that sociological commonsense is a taught skill—encapsulating ‘a whole range of shared, socially inculcated values, attitudes and habits of thought’ that helps one to make ‘sense of the world’ unlike ordinarily understood meaning of ‘commonsense’ as ‘naturally’ acquired skill or knowledge (p. 2). This common sense teaches to decode ambiguity and nuances and look at society with a squint—no neatly laid out canvass or naïve generalizations. Sociologists on their part have to be constantly reminded of this ‘commonsense’ shaping social reality and stand centre stage—within the world of commonsense, albeit not content with the popular version of commonsense, but as an involved critique, no longer practicing a ‘pure and scientific sociology’.

The author’s concern is with certain topics and perspectives that have been under represented in sociology despite the disciplinary orientation of sociology, best fitted to deal with them. The author points out that sociology has followed an evolutionary track much influenced by anthropology and as such, caste, kinship, region and rural and tribal communities have dominated sociological discourses. Noting that this in itself may not be problematic, the author’s discomfort arises from the discipline’s failure to respond to contemporary events such as the caste conflict in anti-Mandal agitation, the ethnic religious based Kashmir and the Punjab secessionist movements—the plea is for sociology to matter in moving forward from theory to understanding the ground realities.

Deshpande’s concern makes him a part of the growing tribe who have recently started questioning pure theoretical and almost static constructs in a given discipline and their inadequacies in dealing with lived-in, continuously changing and evolving events. Why, the author asks, has sociology not risen to tremendous scholarly opportunities contemporary Indian problems provide? Not sure of the precise reason, the author, by his own admission, has attempted this book as a ‘think-through’ attempt towards understanding the predicament (p. 23).

Although Deshpande is talking about sociology, his reflexivity and questioning can very well be extended to other disciplines in social sciences in making social enquiry contextualized and lending meaning to the concept of praxis (Flyvbjerg 2001).

Six contemporary issues are covered in the book. They are: modernity, nation as an imagined economy, Hindutva and its spatial strategies, caste inequality, the centrality of the middle class and globalization and geography of cultural regions.

Tradition-modernity has occupied much space in sociological enquiry –why this should be so is a question Deshpande attempts to address. He argues that it took almost half a century after establishment of sociology as a discipline for academic interest in modernization to cross over the West as until about 1950s, non-western societies were considered to be non-modern. They attracted anthropologists interested in ‘primitive’ cultures or orientalists who investigated the pasts of once great civilizations. ‘Modernization studies’ were sponsored primarily by the US in response to the growing presence of communism and also the homegrown nationalism of middle class elites. Deshpande argues that the Indian sociological scholarship could never escape the dualism: modernity as an outcome of constant contestation and appropriation between tradition and modernity, which in his mind proved to be a conceptual dead end as there is literally no exit from such a framework. According to him, most modernity studies (in sociology) located themselves in the world of tradition and looked out upon modernity from that vantage point rather than branching out in areas such as industry, media or class structure—the more tenable markers of modernity. This was because in India, sociology has grown in close intersection with  anthropology and macro perspectives such as those identified above were clearly outside the scope of such sociology. He, however, notices that by the end of 1990, sociology has moved away from western disciplinary dominance and the grand modernization paradigm in which Indian, Turkish, Indonesian or Brazilian would not be mere ‘local colours’, but would be parts of ‘global theory’ (p. 46).

Although the author does not directly engage with the postmodernists’ discourses, in an oblique way his positionality rejects meta-narratives of which contextually specified texts are seen only as subtexts. There is no one theory of modernity, but many theories that cannot be subsumed under the western hegemonic construct is what the author is arguing for.

In the following chapter ‘the Nation as an Imagined Economy’, the author deals with the concept of nation—presumably a straightforward definition, i.e., nation as an identifiable territory with a single state. He maintains such a concept of nations, even in the non-western contexts, is modelled after western models, i.e., around the basic format of nation-state and democratic governance. However, happenings world over show that. He makes a compelling point that such a commonsense construction of nation has proved to be erroneous as in the contemporary imagination, nation is a cultural construct and can only be defined retrospectively and tautologically—nation has to become one and has to remain one—the mode in which it has been collectively constructed. The author points out the limitation of several concepts such as Anderson’s ‘print capitalism’ as a way of providing techno-cultural resources for the collective imagination of a nation, Lefebvre’s ‘market and state violence’, and Nairn’s ‘uneven development and imperialistic capitalism’ as the bases of third world nationalism to argue that imagined economy- exploitation and poverty due to colonial rule (in the face of India’s legendary wealth), movement for Swadeshi and patriotic consumption and later on Nehru’s modernizing industrial economy – all had contributed to the making of the Indian nation. However, economy no longer remains an ideological resource in the contemporary processes of nation building as the emergent Hindutva and the pro-globalization suggest.

Building upon the changing contours of nation building, the author talks about Hindutva and its spatial strategies in creating places and spaces of contestation and cooption be it ‘Aamchi Mumbai’ or ‘Hindustan for Hindu’ agenda in (re) imagining India. The first four chapters thus trace the path contemporary India has taken as a nation-state.

The next two chapters deal with caste inequalities and the centrality of middle class in India. The author basically questions the heavy reliance on micro-level field data in such studies, which constrains developing a macro-perspective. He uses the NSSO data to talk about economic inequality across caste groups arguing that caste does remain a major impediment in accessing resources. The author once again uses large data set for sizing up the middle class. But his arguments are more than just that—he points out how the middle class is no longer as homogeneous as it once was. The process of differentiation amongst the contemporary middle classes is a crucial one because the differentiated middle class with varied interests and developmental ideologies is inimical to a common project of nation-state because there are sub-national loyalties as well as transnational identities. This point is well taken and yet in the commonsense interpretation, the author’s exposition of middle class is somewhat simplistic. A nuanced understanding would have shown that middle class is an ideological-discursive projection with underlying common threads—not always overtly expressed—even as loyalties are expressed at different levels.

Apart from the analysis, the author has touched upon a point that continues to remain contested in social science research, i.e., legitimacy and validity of small-scale micro-level data versus large scale macro data and vice versa. The issue is unresolved amongst scholars with different disciplinary orientation, i.e., economists, demographers and geographers on one hand (users of macro data) and anthropologists and sociologists on the other (using largely micro data) constantly digging at each other. In my mind, the question is not about one at the cost of exclusion of the other, but a combination of the two. While we do require a macro perspective, it is equally important to have checks on contextualized ground realities—moving back and forth to see match and mismatch between the two.

Globalization forms the last chapter of the book. According to the author, it is inevitable as the previous discourses—within the folds of modernity, nation-state, hindutva and the middle class—converge towards it. The author is on familiar turf arguing as he does almost throughout the book in different contexts that the West remains the main referent for the globalization lens even if researchers are non-western overlooking the constituent meanings and consequences of the term for people differentiated by caste, class, gender and ethnicity and so on. He also argues that globalization has also to engage with the historical trajectories of the phenomena it studies. One is struck in this section by the absence of references for claims that the author makes about literature on globalization (p. 156).

By the author’s own admission there is a convergence on globalization in the last chapter. However, he takes the reader by surprise when he states that globalization is not the central theme—that he is contextualizing it within a lager canvass of the spatiality of social identities, institutions and relations. Subsequent sections including ‘The Geography of Regional Identity’ at the tail end of the book is rather unnerving for the reader even if the content is stimulating and opens up avenues for seeing globalizing processes and identity formations as mutual encounters.

I definitely missed an overall concluding viewpoint and despite the author’s thinking otherwise, the first few chapters definitely needed grounding in the discipline of sociology. Yet the book’s appeal is much beyond the obvious—those interested in modernity issues, embedded identities, social space and idea of India would find the book immensely enriching.

Saraswati Raju is a Professor in Social Geography in Centre for the Study of Regional Development, Jawaharlal Nehru University, New Delhi.