Is the Indian Muslim (Dis)connected? 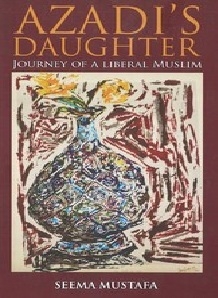 Seema Mustafa’s personal-political memoir, Azadi’s Daughter is a welcome addition to semi-autobiographical writings by women journalists of India that have recently got published. However, this could merely be a coincidence and rather than group the book with the new generation women journalists, one could also bracket it with (political) life writing by journalists in general, irrespective of gender, like Vinod Mehta’s Lucknow Boy or Kuldip Nayar’s Beyond The Lines, and some others. I see no reason to not unfasten the boundaries around categorizing this book. When I say this, I also keep in mind Seema’s own assertion that she herself has hardly ever found gender a restrictive force where her career as a journalist was concerned. In fact she claims that it has perhaps endowed her with a nuanced sensitivity which the male journalist could possibly lack.

Azadi’s Daughter is a brave book. It is brave on many counts as it makes many assertions about the personal as well as the political at the risk of being unpopular. If at all the book may be labelled provocative, nowhere does it seem to be aiming at cheap popularity, read high sales, through its provocativeness.

At the very outset, Seema is careful to assert the plurality embedded in her reputed Muslim family background and apparent Muslim-ness. Every description of the personal in her childhood years is accompanied by a parallel commentary on how, for her, religion or religious instruction was inevitably interwoven with sincere values of tolerance and moderation. Seema’s grandmother Anis Kidwai was a devoted Gandhian and two times Rajya Sabha member, and her mother, nicknamed Azadi, was one of the rare Muslim women of the times working as a sub-editor in the National Herald, Lucknow. Seema’s father was a Colonel in the Indian army, whose eldest brother had migrated to Pakistan during Partition. This brother became a top ranking officer in the Pakistan police and was virtually isolated from his siblings till they had all retired from service due to the sensitive posts they held in their respective countries. The emotional trauma involved in such situations is presented by Seema in a gentle, understated manner.

Through accounts of different incidents which are interspersed in the book, Seema has expressed her consternation at the way Indian Muslims are falsely projected as having Pakistani loyalties and treated with a sense of distrust and suspicion for no fault of theirs. She has been able to successfully put across the anxiety ridden but grossly misunderstood position of the Indian Muslim. To give an example, we come to know that her uncle’s (who had migrated to Pakistan) son was taken prisoner in India during the Bangladesh war and his son-in-law was killed in a submarine ambush with India in the same war. The anguish of having one’s own (Pakistani) people slaughtered at the hands of your own (Indian) army was quickly lapped up by anti-Muslim lobbies and used as a convenient excuse to malign the Indian Muslim. Seema, however, expresses relief that the generation born after Partition is mostly rid of such baggage and wants to move on. Another incident which I find worth citing is when Seema was reporting the Dhaka SAARC summit and M.K. Narayanan was the National Security Advisor in the Manmohan Singh Government. Emerging from one of his meetings Narayanan stopped to speak to Seema when he saw her, only to say, ‘You should be very worried. The Pakistani delegation was praising you.’ According to Seema, ‘the top security official of the Congress led Manmohan Singh government had joined the base elements on the streets to make the usual linkage between Pakistan and the Indian Muslim.’ Needless to say, Seema gives him a befitting reply even if it seems a little idealistic to the reader in the present scenario.

I call Azadi’s Daughter a brave book as it puts up a brave and unapologetic protest on behalf of the Indian Muslim and their maligning. Also because it unwaveringly discusses the gender biases of an unmoderated Islam. One particularly amusing though intelligent observation about gender and the Islamic tradition is made when the young Seema, on being imparted some information about the formation of the Shia and Sunni sects, quietly wonders ‘why they could not settle on Fatimah’, the Prophet’s daughter instead of fighting amongst themselves whether Ali (her husband) or someone chosen by the community should be the next Caliph, when the Prophet of Islam died. The subject of destitution of Muslim women, post the Shah Bano controversy is also well handled.

However, the part where the book actually breaks new ground is the chapter on Kashmir and the Indian Muslims. Aptly titled ‘Nothing in Common’ the chapter shows how the Kashmiri State has been beleaguered at the hands of shabby treatment by the Indian Government, and points out the irony of the Indian army being a ‘brutalizing force’ in the region as against its image as a saviour of Indian Muslims in communal violence ridden areas of the rest of India, like Meerut and Malliana, and more recently, Gujarat. The chapter has several insights into the ‘hows’ and ‘whys’ of the ‘disconnect’ between Indian Muslims, who have been conditioned to wear their loyalty to the Indian state on their sleeve, and the Kashmiri Muslims.

Though Azadi’s Daughter promises to be an autobiography of a woman journalist’s career, it turns out more to be a rationalistic and sincere voice of concern about the plural Indian nation, more particularly, the Indian Muslim. Or maybe it is not just a voice of concern only but a brave and intelligent analysis, borne out by personal experience, of the situation for India’s Muslims as it stands today.

For a reader like me, who could also rank herself as coming from a priviledged and elite Muslim background like Seema does, one agrees vehemently with her as she talks about the failed leadership among Indian Muslims, rightly describing Muslim leaders as ‘not leaders, just followers of a system that brings them political dividends’. The most disconcerting part, however, is her observation about how the average young Muslim (who is not protected by his wealth or station) is becoming a regular victim to the terrorist propaganda unleashed against them. According to her, communal violence, though it still exists, is fast getting replaced by the more ‘subtle and fashionable targeting of Muslims as terrorists.’ She has discussed several cases of blatantly unlawful detentions, tortures and even killings of poor Muslim youth in the Hyederabad Mecca Masjid case in minute detail, in addition to some similar sordid stories of unlawful detention and torture in Delhi. The young Muslim’s spirit is broken forever, after having gone through these torturous detentions and Seema says, ‘pitted directly against the mighty state, (he) emerges humiliated and shrunk when he is released.’ One can only hope that Seema’s worrying account of the state of affairs will shake more right-minded people out of their stupor and prompt them to seek active intervention by the state in these vital matters.

The final verdict on the Indian Muslim, however, is optimistic. The book argues well about the legitimacy of the observation that Muslims are not terrorists and Indian Muslims are certainly not so. Their primary concerns are education, employment and development and they are in no mood to be left out of the otherwise promising Indian scene. As regards security that is guaranteed to them by the Indian Constitution, though Seema strongly claims that Muslims, except for a miniscule portion of Shias (who have walked into the trap of divisive politics), do not vote BJP.

Despite the author’s sure-footedness and remarkable career in journalism and also politics, the arguments in the book tend to get repetitive sometimes as also self-contradictory. One small example would be the Indian Muslims’ concern for safety and security, which is both highlighted and denied at the same time in different parts of the book. Another difficult area which she has therefore equivocated about, is regarding prejudices and religious fervour as existing in her highly secular and cultured as well as priviledged family. The editing and proof reading are undoubtedly a trifle hastily done. Overall, the book is extremely commendable for a secular pluralistic and ahimsa loving Indian nation. It makes for a stimulating read.

Baran Farooqi teaches English Literature at Jamia Millia Islamia. Her interests include translating from the Urdu into English and Women’s Studies.