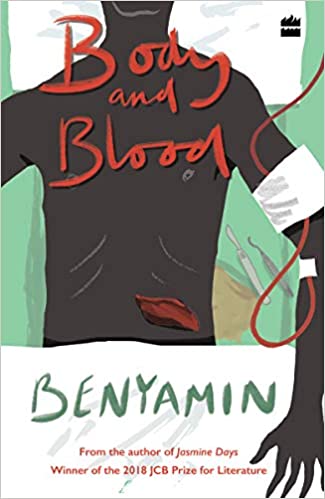 Benyamin’s latest novel in English, Body and Blood, unravels a new kind of politics that interweaves faith and crime as the author deals with the influence of religious dogmatism in the lives of faithful believers. The setting of the novel spreads over a group of Indian cities and the narrative is shaped by the debate between personal faith and organized religion. The novel unravels the perils of a religious mafia that operates medically orchestrated crimes such as organ trafficking. The book has been premised on the issue of organ trade that affects the lives of four friends—Sandhya, Midhun, Ragesh, and Rithu. They are together because they are members of an evangelical society based in Delhi led by Pastor Sam Philip. When Midhun dies in a minor hit and run accident, his friends are caught in a web of deceit where interpersonal relationships and their personal faith get entangled in spiritual trade. What follows then is a quest for justice which is both personal and collective. As the title suggests, ‘Body and Blood’ alludes to the sacrament of the Eucharist as a remembrance of Christ’s sacrifice during the last supper as a communion between him and his followers. Similarly, this ‘small and intense’ fellowship also, founded by Korean pastor Ko Hee-Sung, seals a sacrificial communion with its followers.

As Marx rightly said that religion is the opium of the masses, the text exposes the ferocity of religious-cultural practices of evangelical Christianity. The novel reveals that the exuberant missionary activities of such millennial sects can be dangerous and life threatening because social service with a crude motive of spiritual trading and religious conversion creates a commercial  enterprise. This fellowship promulgates faith through performative rituals such as singing, dancing, chanting, and uses the gospel in creating a network of followers through pre-existing social relationships wherein people are compelled to join as others preach the word of god through social service and experience. The four protagonists find their way into the fellowship through a network that promised faith and salvation through social service. The book is not an attack on Christian faith or any particular sect but what Benyamin does is to project the idea that charity and faith possess entrepreneurial potentialities that are exploited by religious groups. The history of evangelical societies in India goes back to the religious conversion of marginalized people based on their personal experience of healing that results in communal ecstasy. However, this novel exposes the jeopardizing situations created in societies due to growing evangelical sects as an organized faith. The characters in the novel are drawn towards the fellowship because it is far removed from the traditions of Pentecostalism and does not follow the strictures of established Christian sects such as Catholicism, and so it is flexible in nature so much that it allows its followers to find their faith through rationality and social service.