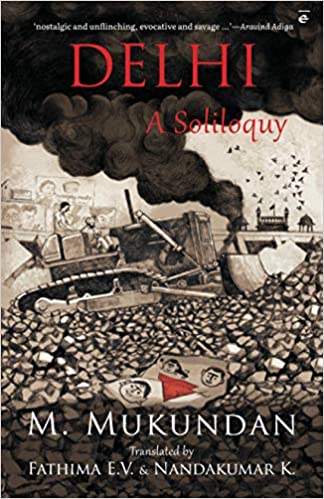 This novel is really a chronicle, like Malory’s Le Morte d’Arthur, of a time, and characters who lived in that time, kings, nobles, knights and wizards; what happened to them, the events of which they were part, and how they survived or were destroyed. But that’s where any resemblance fades. This is about a group of impoverished Malayalis who live in or have come to Delhi to look for a better life.  This is not to say that they were a band of friends; they were for the most part not but got to know each other and to help one another bonded by their being Malayalis, coming together as an almost instinctive act of protection in a city they did not know or understand.  The novel spans the time and events  from 1959 to the present, beginning with the arrival in Delhi of Sahadevan, who becomes something similar to the Chorus in Greek plays, commenting on events, playing a part in some. He, like many he comes across, is penniless and starts doing menial jobs for the small amounts he gets to help him keep body and soul together.

Sreedharan Unni, a dedicated Communist, dies of a heart attack early in the novel, but it is really his family that is one of the major focal points unfolding events in Delhi: Satyanathan, his son, Vidya his daughter, and Devi, his wife. Devi, more than the others is a person who emerges as the quintessential survivor. Her grief at her husband’s death stays with her, her feeling of helplessness that came  when he died, but she learns to cope, and doggedly continues to live, for her children, basically.