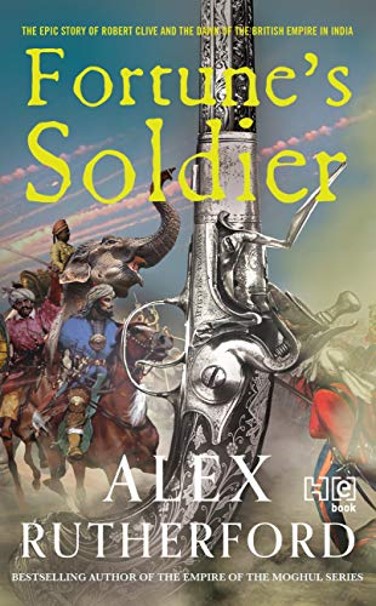 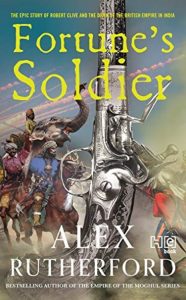 ‘The Epic Story of Robert Clive and the Dawn of the British Empire In India’. So says the punch line on the front page of this exhilarating book Fortune’s Soldier by Alex Rutherford which though is to a large extent misleading. The reader would expect to be acquainted at the onset with the avowedly main protagonist of the novel Robert Clive. On the contrary we are confronted with the fictional character of Nicholas Ballantyne, a Scotsman whose family estate would be confiscated in the Jacobean rebellion of 1745, Ballantyne being one of the many fictional protagonists Rutherford creates to further embellish a largely historical tale about the dawn of the British Empire in India and the role of the larger than life Robert Clive in the early uncertain days of the British in India. I would go so far as to say that the rise of the British power in India would have taken a vastly different route but for the omnipotent presence of Robert Clive in the affairs of the company.

A reader unacquainted with the history of colonial India would take a different view on reading this book. The fictional Nicholas Ballantyne, the protagonist, hogs the limelight in Rutherford’s epic tale about the initial days of the East India Company in India picking the thread around the eve of the Seven Years War between Britain and France (1746-1753) and ending with the Battle of Plassey. Ballantyne first meets Robert Clive aboard the ship Winchester sailing for India sometime in 1745. We are also introduced to another fictional character George Braddock, depicted as a bad fish who would end up betraying the British cause by allying with Nawab-Siraj-Ud-Daulah. In the novel Braddock fights a duel with Ballantyne over a trivial issue heralding the beginning of a bitter rivalry which would end with Ballantyne despatching Braddock to his creator at the Battle of Plassey.

All three men in this novel are though connected by a common thread, the East India Company. Robert Clive was packed off to India by his widowed mother who despaired of his truant and high spirited ways. The fictional Ballantyne was on the other hand forced to seek his fortunes in India by his uncle who sought to protect his nephew from the effects of the terrible backlash the family was likely to suffer because of their role in the Jacobean Rebellion of 1745. These were eventful times for the European powers in Southern India. The English and the French were embroiled in a bitter conflict with each other in South India, a contest which formed part of a larger global struggle between the English and the French for control of land, sea and trade routes and resources in general.