Interface of Region, Religion and Politics 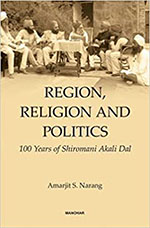 Reading the synoptic narrative of the hundred years of the chequered political career of the Shiromani Akali Dal in the volume under review makes us aware about the uniqueness of the oldest State-level Party which emanated from a religious reformist movement and went on to qualify both as a ‘regionalist’ and an ‘ethnic’ party. As ethnic Party, Akali Dal has sought and received considerable political support from the Sikhs in India and even among the Sikh diaspora, while taking up the community’s religious, social and political causes as central to the Party agenda. As a ‘panthic party’, Akali Dal since its inception has claimed to be the ‘sole representative’ of the Sikhs (p. 78). Also, like the other two similar ideologically rooted/cadre-based ‘regionalist’ parties coming out of movement, i.e., the National Conference (NC) and the DMK, Akali Dal has also for long pursued cultural and geographical region-specific autonomist politics vis-à-vis the centre. The Party stand has always been based on the adoration of two political deities—communitarian nationalism and Indian nationalism (p. 79).  However, given the significant territorial and demographic changes that happened in Punjab at the time of Partition and even after the reorganization in 1966, the Party finds itself often as being ‘trapped at the crossroads of region and religion’ (p. 344).