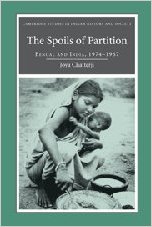 Is the historical meaning of the partition exhausted by the bewildering and horrifying nature of the event itself or of the moment of loss, violence and multiple re-orderings of lives by governments and communities? The concern with the proliferating tracks of the event has been the dominant one in partition studies since its founding moment in the texts of Kamla Bhasin, Ritu Menon, Gyanendra Pandey and Urvashi Bhutalia; its lineage extends to Vazira Zamindar’s recent book* that has addressed the Pakistan side of the story as well. Joya Chatterji’s Spoils of Partition shifts the attention to the process that unfolds with the partition. It looks at the ways in which the nascent Indian polity and society was reordered by the act of division itself and by the efforts of refugees to recast their lives, processes that had not stopped with the partition but unravelled over time. Spoils firmly establishes the importance of extending the question of partition by arguing for the centrality of the refugees in shaping West Bengal in the 1950s and 60s.

The backbone of her argument—especially illuminating if we take the strengthening of Hindu communalism in the western partition into account—is the way refugees shaped Left politics in the East. But her argument also extends sideways to explore the equally significant social and political ways in which both Hindu and Muslim refugees in the new state of West Bengal have been transformed by partition. All of which goes to make the book pathbreaking.