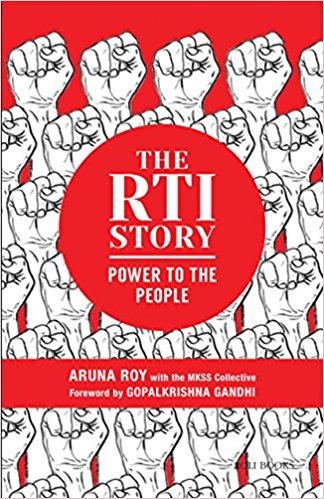 Much more than an authoritative account of how the ‘right to information’ (RTI) came to be enshrined in Indian law, The RTI Story describes the building of theory through grassroots practice. Choosing to share the lived experience of poor people, Aruna Roy and her associates encouraged them to reflect on their situation, analyse and articulate the bases of their deprivation and exploitation, and to orchestrate collective corrective action. Demonstrating through practice the critical importance of information as a tool to lift people out of poverty and protect them from injustice, the process led seamlessly—albeit with many twists and turns—to the official recognition of information as a basic right of citizens: the Indian experience of a collective people’s movement for RTI is without parallel.

When Aruna Roy, Nikhil Dey, Shankar Singh and his wife Anshi set up their home in a mud hut in the poor Rajasthani village of Devdungri in 1987, they had no clear plan of action nor an inkling of where destiny would lead them. Bound by shared political ideologies, principles and values, and a concern for exploitation, inequality and poverty in rural India, they agreed on the need to build people’s understanding of the role of democratic institutions and of their rights as citizens in order to facilitate their realization of constitutional rights.

Aruna had served in the Indian Administrative Service and resigned some years before to work among the rural poor; Nikhil dropped out of college in the US to return and work for the uplift of his people; Shankar, a rural Rajasthani, with keen political instinct and communication skills, provided the grounding for the team to establish base in a region he and his wife were familiar with.They lived as their neighbours did: drawing water from the common well, sleeping on the ground, cooking on an earthen chulha. But the outsiders were nonetheless objects of much curiosity and not a little suspicion. Situations of potential conflict inevitably arose which had to be handled with sensitivity and dissected for future lessons. As the villagers got to know them, confidences were shared, problems were discussed and trust grew.