Indian Career of an Italian Orientalist 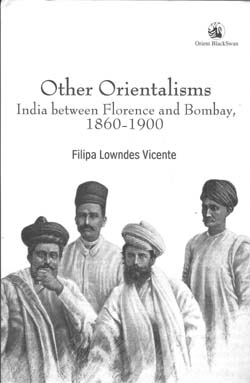 Indian Career of an Italian Orientalist
Amar Farooqui
OTHER ORIENTALISMS: INDIA BETWEEN FLORENCE AND BOMBAY, 1860-1900 by Filipa Lowndes Vicente. Translated from the Portuguese by Stewart Lloyd-Jones Orient BlackSwan, 2013, 308 pp., Price not stated
June 2013, volume 37, No 6

This fascinating book is a detailed study of the Indian ‘career’ of the Italian Orientalist, Angelo de Gubernatis (1840-1913). It is based on a systematic exploration of archival material on this subject available in Florence. The author has painstakingly pieced together the intellectual life of Gubernatis during the decade c.1878-1887. 1878 was the year in which Florence hosted the Fourth International Congress of Orientalists. Gubernatis was the key organizer of this event. About ten years later, the Indian Museum of Florence, a state-funded institution set up at the initiative of Gubernatis, was thrown open to the public. Shortly afterwards Gubernatis shifted to Rome, which is where Vicente’s narrative ends.

This is also a book about the relationship between Gubernatis and the Goan scholar and medical doctor, José Gerson da Cunha. Da Cunha’s multiple, and atypical, identities defy neat classification. A Goan Catholic, residing in British India (with a roaring practice in Bombay), he was an Orientalist in his own right. His association with Gubernatis was that of an intellectual collaborator rather than that of a passive ‘native informant’.