In the Shadow of the Banyan Tree 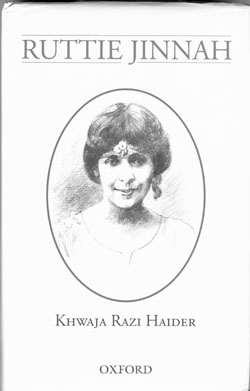 The purpose of Khwaja Razi Haider’s book is to shed light on the life and personality of Ruttie Jinnah, the wife of Mohammed Ali
Jinnah. It is a well known fact that Jinnah was an extremely private person and this book tries to satiate the curiosity of researchers and lay readers about the inner aspects of Jinnah’s life. It is clear from the title that it is a biography of Ruttie Jinnah but it is difficult for any writing on a person who is associated with Jinnah not to be overshadowed by the massive penumbra of the Qaid himself.

This fact gets reinforced because of the short life of Ruttie Jinnah (born Ruttie Bai on 20 February 1900 to Sir Dinshaw Petit), who died at the relatively young age of 29 before she could really establish a role for herself like Fatima Jinnah, the favourite sister of Jinnah who went on to have a brief role in Pakistan’s turbulent post-formative phase. The book was first published in Urdu in Pakistan in 2004 and the author himself has translated the work into English.