In the Frontline of Planetary Battles 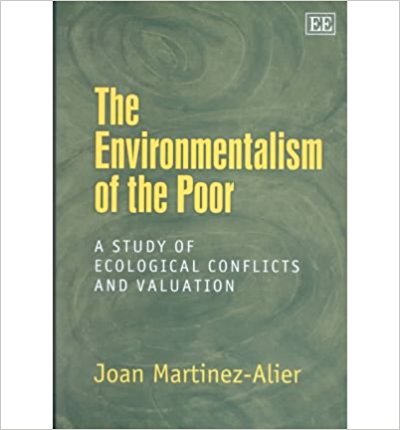 In the Frontline of Planetary Battles
Rohan D'Souza
THE ENVIRONMENTALISM OF THE POOR: A STUDY OF ECOLOGICAL CONFLICTS AND VALUATION by Joan Martinez-Alier Oxford University Press, 2006, 312 pp., 595
January 2006, volume 30, No 1

This book is aimed at the very heart of belief in the modern world: the ineluctable faith in economic growth. The idea of progress tied to inexhaustible desire and the unrelenting quest for want driven development have, in concert, become elements central to the globalizing economy. In the media generated imagination, a rising stock market, increasing exports, consumer confidence and growing markets are loudly claimed to be the ‘objective’ indicators of universal salvation and by implication approximations to the virtuous and good life. But many justifiably ask, are these false gods or empty idols or a cult finally gone awry? Some discontents have gone so far as to argue that the neo liberal project, at this momentous apex of its fervour and triumph, has actually begun to come apart, most dramatically upon the very earthly roots of its existence. Economic growth is exposed for what it is: wealth essentially as a fatal accounting fiction made possible at a huge ecological loss. Put differently, the economy is not a miracle; it cannot conjure loaves and fish out of thin air or walk on water, it has real and evident environmental consequences.