In the Context of Her Times 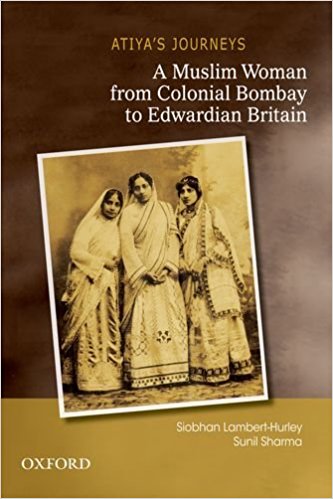 In the Context of Her Times
Saifuddin Ahmad
ATIYA'S JOURNEYS: A MUSLIM WOMAN FROM COLONIAL BOMBAY TO EDWARDIAN BRITAIN by Siobhan LambertHurley Oxford University Press, 2011, 307 pp., 550
March 2011, volume 35, No 3

The historical studies of Women and Gender in South Asia and the Islamic world have come of age. The gendered nature of cultures of travel has received increasing attention in recent years from imperial and South Asian scholars. These scholars have tried to explore the economic, political, social and cultural lives of Asians in Britain from the early seventeenth to early twentieth century, within the context of colonialism, race, gender and class. Even as studies on women and gender in the contemporary world have got a boost with the result, our understanding of womens life and experiences has got enriched. The greatest gains have occurred in the study of 19th and 20th centuries, when changes in the womens lives were particularly visible, and the wealth of sources has allowed us to deal with a range of questions. Following her engaging examination of the emergence of a Muslim womens reform movement in India in Muslim Women, Reform and Princely Patronage: Nawab Sultan Jahan Begam of Bhopal (London: Routledge, 2007), Atiyas Journeys: A Muslim Woman from Colonial Bombay to Edwardian Britain is a fascinating account of her life, writing and travels.

Based on abundant primary sources in Urdu, including letters, writings, reports, and reminiscences of friends and relatives, collection of private papers and innumerable books and journals in Urdu, Persian, English, Gujarati and Bengali, the authors shed light on an important part of Indias history. The cultural and intellectual history of South Asia is not complete without reference to Atiya Fyzee, yet people in India and Pakistan as well as Britain hardly know about her.