In Search Of Cohesion 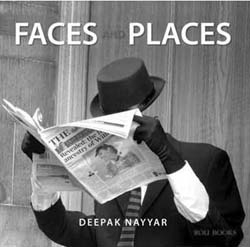 This book is rife with curiosities—like this image of a smiling dog keeping company with four men, all fashioned out of stone; a Mandrake like figure poring over The Times London with his hat sitting jauntily on the blank space where his head should have been; or the voluptuous beauty of a protea neriifolia growing in a Cape Town botanical garden. Yet none of these oddities evoke half as much interest as the existence of the book itself. What drives an internationally known economist and the author of some 15 well-considered works within his discipline, wish to venture into a space now being increasingly peopled by anyone with a smartphone and a Facebook account and author a volume of photographs?[/ihc-hide-content]
Nayyar anticipates the question and offers an explanation. The desire to get others to see the world as one has seen it was an obvious motivating factor. ‘Photography takes an instant out of time, altering life by holding it still’, as American photographer Dorothea Lange, whose black and white images told the story of the Great Depression, once observed. In this instance, it is not so much about what one sees, but the way one sees it that becomes important. There were other motivations too for Nayyar—among them the allure of being the amateur pursuing what is essentially a pastime in a world that is fixated on specialization and professional-ization. The schoolboy of 1958 with an Agfa box camera graduated in time to a Coigtlander compact 35 mm camera. As an undergraduate in Oxford in 1968, Nayyar purchased for himself a sturdy, German made Praktica LTL#(2.8/50) and from then on there was steady upgradation. In time the digital era asserted itself and the photographer had to, albeit reluctantly at first, graduate to a Canon G10 (14.7 megapixels) in 2008.
But the world is hardly interested in the photographer’s tools; it is what the tools produce that is of the essence. An engagement of 50 years that had the world as a backdrop—only a third of the photographs in this collection focus on India and Indians— is bound to yield a rich harvest of images. Nayyar confesses in his preface that selecting the 160 images that finally made it into Faces and Places, turned out to be a ‘difficult and time consuming process…not just in terms of the quality of photographs, but in terms of choosing themes and finding cohesion’.
Did he succeed in this effort to find cohesion? The title of the book suggests its two broad themes which in turn are divided into thematic clusters. But this is where a paradox surfaces: while each discrete photograph had its own framing context—or as the Lange-ian definition went, represented a moment plucked out of time—it was now made to cohere to the framework of a book. Retrofitting of this kind, achieved largely through catchy captions and skilful juxtapositioning, sometimes works and sometimes clearly does not. When the placements succeed, each image sings its song. A double spread of two lily ponds—one recalling a Claude Monet canvas and is indeed the famous pond in Monet’s garden that the master had rendered on canvas on multiple occasions; the other from Ubud, Bali, with its verdant tropical vegetation—are in perfect equilibrium with each other. But there is also evidence of poor positioning on these pages. Should not the thematic sub-group of Streets, for instance, figure in the Places, rather than in the Faces, section? Why was that wonderful shot of a Tanzanian market showing banana sellers not juxtaposed with that of a pensive young woman hawking the same fruit in Hubli, Karnataka?
Captions are important because there is a kind of reciprocity between word and image. The text accompanying a photograph can radically alter the way it is perceived. Some captions in this volume seem to be devised rather mechanically with no light being shed on the subject. One would, for instance, have liked to know more about the person behind that amazingly beautiful male face captured in black and white and cropped close in the Faces section. But the caption reveals little: ‘Kanpur, Uttar Pradesh, 1970: Wrinkles and a smile.’ As does the caption for a striking double spread, also in the Faces section, which shows an elegantly bescarved woman holding up a figurine. It goes: ‘Abu Simbel, Egypt 2010. Looking through the key, a symbol of eternal life.’ The fact that the woman in this portrait happens to be India’s greatest living historian, Romila Thapar, is not even hinted at! Fortunately, not all the captions are as cryptic. The two studies of the Iguasu Falls which border the three countries of Brazil, Argentina and Paraguay, are accompanied by text that allows the viewer to actual perceive the changing play of light on falling water from early morning to late afternoon.
Inadequacies in their placement and contextualization and their enormous spatial and temporal diversity notwithstanding, these photographs underline the universality of the human experience in the contemporary world. As Nayyar himself comments while referring to his portraits of people located in different corners of the globe, what they have in common is their shared existence as human beings. Through his act of capturing on film or in the digital space, his people, places and objects—there are some wonderful objects that animate these pages including sake casks, a street drain cover, or a cluster of copper pots—Nayyar’s work seems to ‘thicken the environment we recognize as modern’, a quality that Susan Sontag recognized as distinctive of the art of photography.
Pamela Philipose is Editor-in-Chief,Women’s feature Service,New Delhi.[/ihc-hide-content]