In a Militarized Landscape 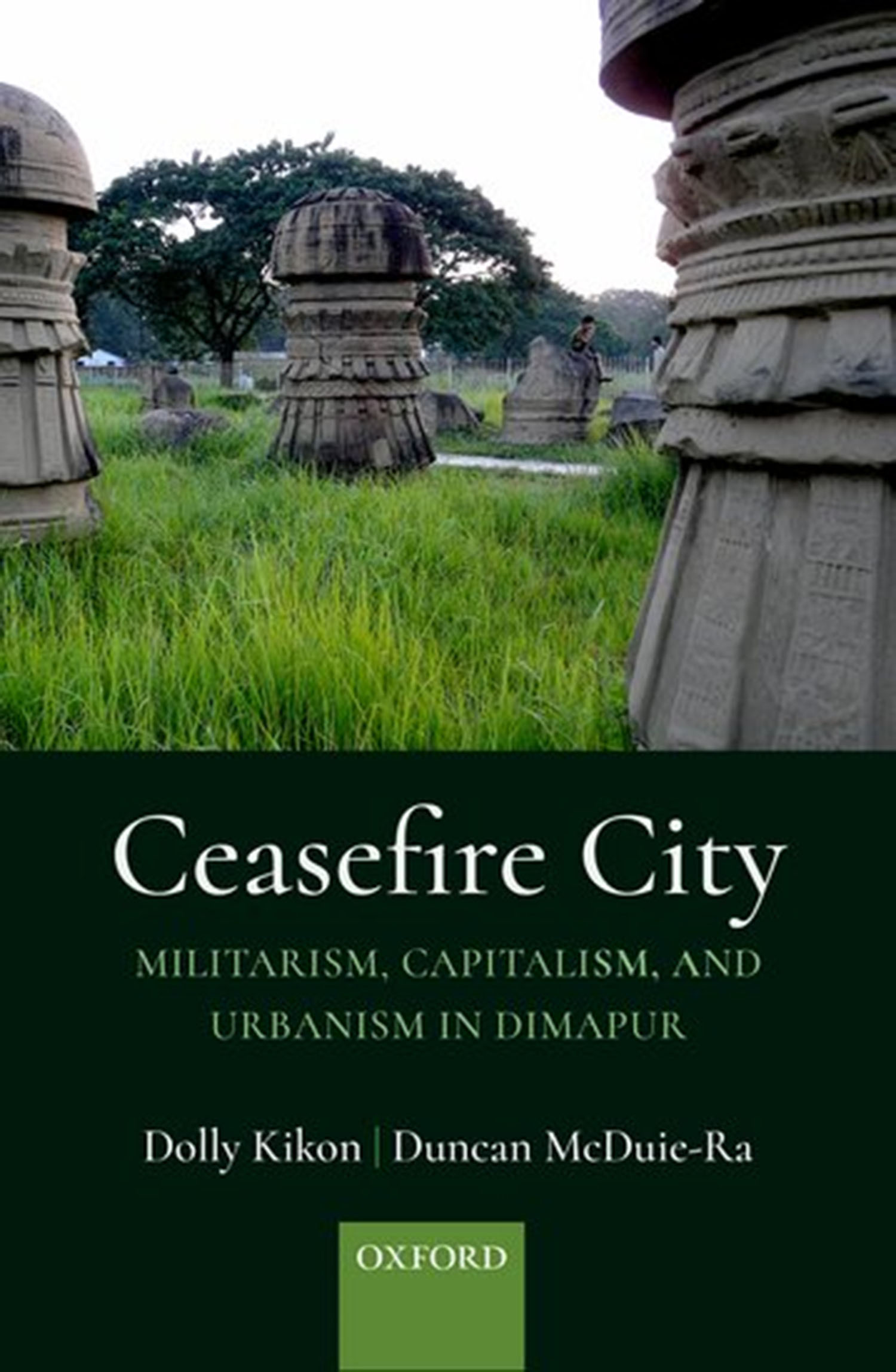 Popular and academic discourses on Northeast India have for long been centred around the themes of conflicts, ethnicity and insurgency. This is not surprising given that the region has been seen as a ‘troubled periphery’ marked by ‘durable disorder’. Seen against this backdrop, the book under review marks a significant departure from extant literature and comes out as a creative and refreshing interdisciplinary attempt to understand the complex and multi-layered intersection between militarism, capitalist desires and dreams, and the spatial order and disorder envisioned by urbanism in a ceasefire city like Dimapur. The authors respectively brought their training in ethnography and urban sociology to bear upon the ‘two-part focus’ of the book, namely the production, and politics of urban space on the one hand, and story-telling in peri-urban Dimapur on the other hand.

While the first part, which encompasses two of the five chapters of the book, viz., ‘Migrant City, Tribal Territory’ and ‘Producing Urban Space’, enables the authors to capture the order and disorder entailed by Dimapur as an ‘experimental spatial order’, the second part comprising the chapters on ‘Audible City’, ‘Huntingscape’, and ‘Dying in Dimapur’ helps them navigate ‘deeper into the lives of residents, migrants, sojourners, and interlopers, and the worlds within and outside the city they traverse, create and occupy’ (p. 218).

The choice of Dimapur as the analytical focus of the book is interesting: as a ceasefire city, Dimapur is also simultaneously considered a ‘borderland’, ‘frontier’ and ‘migrant’ city. Being the biggest urban area in a tribal majority State, it attracts migrants both from mainland India and from various parts of Nagaland mainly for its economic opportunities; many of the latter take refuge in Dimapur as victims of armed violence in Nagaland. The relative peace and stability engendered by the ceasefire agreement between Government of India and the National Socialist Council of Nagalim (NSCN-IM) in 1997 created a favourable business climate for migrant ‘outsiders’ and local entrepreneurs including former insurgent leaders to invest in business, estate and infrastructure projects.

However, as Kikon and McDuie-Ra illustrate, the transformation and politics of Dimapur’s urban spatial order remain precarious. Out of the many, three causal explanations are in order: firstly, the existence of multiple actors—state, non-state, and state-like—which jostle for power and control. Secondly, the embedded culture of corruption which makes development appear like leaky vessels at best and ‘broken machine’ at worst, which ‘hums away, with half of its parts missing or dangling off the sides’—to borrow the powerful metaphor used by the authors (pp. 1-2).  Thirdly, the disruptions of law and order which became evident in 2015 and 2017, caused respectively by the lynching of ‘raped accused’ Syed Farid Khan and the violent protest against purported municipal council elections.

The way in which Khan was summarily dragged out of Dimapur Jail, lynched and carried for over eight kilometres before he was strung in the City Tower reinforced the precarious sense of belonging that a migrant outsider may desire and aspire for in Dimapur. The violent protest against municipal elections unravels how attempts to secure urban development have to navigate transgressive spaces where ‘complex inter-legalities of producing urban space and metropolitan governance’ are brought into sharp relief (p. 233). It also simultaneously underscores how competition between rival political leaders can entail an ugly turn in violent politics in as much as it points towards the unsettled nature of the Nagas’ claim for ‘equality as tradition’ where patriarchal norms trump gender justice, as I have analysed elsewhere.1

Despite the authors’ claim that Dimapur has no public history and a single museum to celebrate its past, the memorials, village urbanism, visual culture, church and religious buildings in the city demonstrate the rich imageries, aspirations, desire, dreams, experience and struggle of the people and the city with their marked ethnic, social and political plurality.  Teasing out these help Kikon and McDuie-Ra to unravel ‘the images and texts that reflect a lived cosmopolitanism—and its limits’ in ways that ‘accompanies and challenges dominant ways of understanding the city, its component parts, and its particular ‘frontier constellation’ (p. 23, p. 218).

The three captivating stories in the second part of the book, viz., the struggle and challenges faced by music artists, hunting and dying in Dimapur, deepen and extend the arguments and ideas flagged in the first part. To explicate how ‘ways of hearing and discerning the history and memory’ are central to Dimapur as an ‘audible city’, Kikon and McDuie-Ra lay bare the lived experience of three prominent music makers, namely Kevi Kiso, the proprietor of Jam Tree—a music studio, Alobo Naga, the owner of Musik A, a music school, and Tali Angh, a music artist. Considering that music is integral to Naga life and given the proliferation of music cafes, studios and bands in the post-Ceasefire period, the Government of Nagaland set up a Music Task Force in 2006, and has promoted ‘music as an industry’ since 2012 (p. 118). However, as the ordeal of running a music studio and school by Kevi and Alobo respectively bear out, this ambitious project has to navigate frequent power outages, unemployment, and poor infrastructure.  Yet, the innovative ways in which Alobo tries to improvize western music to adapt to Nagas’ taste and sensibility by drawing from themes of unity, reconciliation and dignity of labour or Tali Angh’s ingenious ability to capture faith and hope in the midst of brokenness and despair ensures that music continues to capture the ‘voice and sentiments of a larger public in a militarized city’ (p. 135).

While ‘Huntingscape’ as  ‘masculine leisure trips and a way to experience and define nature and wilderness’ (p. 156) narrates stories of encounters between urban Naga hunters with state/non-state actors and outwardly spirits as they venture into the forest, the chapter on ‘Dying’ powerfully demonstrates the complex yet unfinished agenda of place-making and belonging in Dimapur and beyond.

The story of John, a Naga hunter, sharing a ‘game meat’ and the hilarious outburst of emotions with a Karbi stranger after savouring a ‘bottle of rum’ during a hunting expedition underlines the raw power of solidarity and emotions which stands in contrast to conflict zone in the Nagaland-Assam border (p. 167-68). Yet, Peter’s ordeal of being caught and jailed by the Assam Police (pp. 172-73) and Vandan’s ‘unpleasant encounter’ with armed Dimasa insurgents illuminate the ‘reality’ of ‘taboos’ and mutual ‘ethnic suspicion’ which ‘connect the lives in Dimapur to the new conditions of illegality, danger, and encounters in the fringes of urban spaces’ (p. 169).

Although Dimapur drives urban capitalist desires and dreams, it remains a migrant city where most tribal settlers consider their villages as ‘home’. This in turn gives the city a sense of impermanence. The  elaborate arrangement and rituals associated with attempts to bring the dead body of Khodao Yanthan, the Vice-President of NSCN-IM from Lakhuti, his remote village in Wokha district, to Camp Hebron in Dimapur on 3 March 2010  for a spectacular ‘national funeral’ before he was brought back to Lakhuti not only ‘highlights how Naga nationalism and militarism are reconfigured in an urban space and enacted as an event’ but also ‘gives us an idea about belonging and negotiating one’s presence in a ceasefire city’ (p. 191, pp. 186-91). It also shows how ‘death rituals and burials as social practices’ are invested with immense ‘symbolic and political’ significance (p. 185).

The absorbing success story of Temjen, a former Naga armed cadre apprehended by the Indian army and jailed in Tihar, to run a chain of coffin shops in Dimapur is used by the authors to elaborate both the everyday lived experience and struggle of a former insurgent and how in the post-ceasefire period hitherto ‘transgressive’ acts such as making coffins for the deceased of the Indian army or rival armed factions become normalized.

In sum, Ceasefire City creatively engages the complex ways in which ‘banal militarism’, that is ‘everydayness of militaristic displays of force and authority’, overlaps with capitalism and urban spatial order (p. 191). Kikon and McDuie-Ra have done a commendable job by capturing the subtle nuances in which these entail spatial order and disorder, pride and shame, hope and despair on the one hand, and the invariable ways in which they implicate urban futures in Dimapur and beyond. Given that ‘authentic’ Naga culture and identity is considered to start from where Dimapur ends, it may continue to be ‘off-the-map’ but not certainly in urban studies. In bringing back Dimapur ‘on-the-mental map’, Kikon and McDuie-Ra have invited us to imaginatively engage with the complex dynamics of place-making, belonging, inclusion/exclusion and multiple legal and political orders in a ceasefire city like Dimapur and beyond where militarism, capitalism, and urbanism thrive in conjunction.