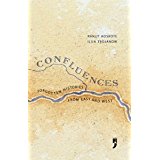 In Season 6 of the Game of Thrones, an American epic fantasy television drama series, an adaptation of A Song of Ice and Fire, George R. R. Martin’s series of fantasy novels, one of the characters Lord Baelish poignantly remarks, The realm You know what the realm is? Its a thousand blades of Aegons enemies, A story we agreed to tell each other over and over till we forget it was a lie
Replace the word Realm with Civilization and we are closer to the view that is espoused by Ranjit Hoskote and Ilija Trojanow in a remarkable book titled, Confluences: Forgotten Histories From East and West.
Perfectly poised under hybridity, the book locates the formation of culture at the brink of civilizations and resurrects histories that have been forgotten. The authors locate culture formation in the tributaries that lead up to the ocean that have been forgotten in the annals of a particular kind of history or as they call it, the great river.