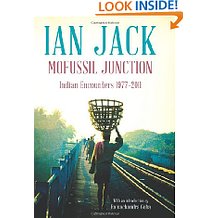 On the one hand there is reportage and investigative journalism. On the other, travel writing and adventure story telling. And then there is Ian Jack who combines all these genres with fine felicity in his book Mofussil Junction: Indian Encounters 1977-2012. This collection of essays encapsulates his experiences and encounters in India.
The terms ‘mofussil’ and ‘junction’ in the title could easily mislead one to believe that the book is about a bygone era—one in which administrators in sola topis managed the affairs in the Indian hinterland and heaving steam engines drew up to deserted and dark railway platforms. Although references are made to such times the bulk of the writings are about an India spanning the period between 1977 and 2012. The articles have been divided into five sections making it easier for the reader to skip back and forth among them according to his preference.

‘Places’ takes the reader from remote Motihari in Bihar to the teeming cities of Bombay and Calcutta. With acute perception Jack picks up on the unique character of these metros. ‘Clever Calcutta’ is a place where ‘it is easy to feel ignorant’ and where the ‘bhadralok’ are fiercely protective of their culture. Bombay, of course, worships only wealth and the corruption that accompanies it is plain to see. Moving from the suburban sprawl to the iconic Taj Hotel via Crawford Market, Jack makes the reader travel the distance. ‘Serampur’ could well be read as the centre piece of this section. Indigo farming, caste distinctions, district life and missionary activity are all part of its canvas.

‘People’, the next section, as one can guess contains portraits of a variety of luminaries ranging from Nirad Chaudhuri to Benazir Bhutto and Sonny Mehta to G.D Birla. Jack chooses not to sensationalize what may have been considered the notorious and infamous incidents in the lives of these individuals, but instead meets and interacts with them, extracting their human traits with empathy and understanding. Responding to Jack’s honest and direct queries, they too are candid and open. Though witty and humorous he neither lowers his writing to caricature nor slips in unnecessary malicious content.

>p?‘The Dynasty’ contains seven articles exclusively on the Gandhi family. Ian Jack arrived in India at the tail end of the Emergency and was retained by his paper to follow India’s progress in the years once it had been lifted. He minces no words in listing the many blunders made by Sanjay, the heir apparent, and how everybody but his mother, the Prime Minister, saw the unpopularity he was garnering with his high-handed and inflexible ways in matters related to the mass sterilization and the slum removal campaigns. Sanjay Gandhi’s overwhelming political ambition and growing unpopularity is described by a leading Communist politician of the time to be ‘like the lst act of a Greek tragedy’. In contrast, the portrayal of the other son Rajiv Gandhi, an airline pilot, who found himself catapulted into the very centre of the political arena post the assassination of his mother in 1984, appears to be more compassionate. In a candid interview Ian Jack probes Rajiv about his religious views. What comes through is the newly appointed Prime Minister’s ‘seductive frankness’ and confirms his ‘Mr. Clean’ persona—quite clearly the two characteristics that endeared Rajiv to the masses in the initial years of his governance. The very next article brings us to May 24th, 1991, and Rajiv Gandhi’s funeral. In these pieces, Jack exposes India’s recurring fascination for dynastic rule and the Indian voter who is a realist to the extent that he declares that since all the political candidates are ‘goondas’, one may as well play safe and vote for one who is related to the current prime minister! That any Gandhi, ‘even a Gandhi from Turin’ is the only eligible candidate to be Prime Minister, highlights the irony even further.

In ‘Life And Death’ there are a series of articles on events and incidents that shook the country with the enormity of the destruction they wrought and the brutality that they exhibited. The blindings at Bhagalpur, an unexplained train wreck on a bridge in Bihar, the Bhopal Gas Tragedy and the alleged state-sponsored Sikh massacre at Trilokpuri, Delhi, are well documented by Jack. The author’s own traumatic time connected with an emergency appendix operation in Patna makes for lighter reading in this section.

Although Delhi, the nerve center of the country and other metros like Bombay and Calcutta figure in many of his articles, in the final section ‘Fellow Travellers’, small town India seems to occupy Ian Jack. As he travels, mostly by train, to the dusty district towns and sparsely populated villages he begins to record a sociological study of what he sees and is confronted with. It is apparent that he makes the effort to delve deep and does his ‘research work’, like his friend the Major is wont to do (Epilogue), before he visits a place and meets its inhabitants. In some cases he knows more than the locals and helps them make discoveries in their own backyards, e.g.’ George Orwell in Bihar’.

Jack’s curiosity and intrepidness led him to the remotest of destinations in the country where most Indians would never even think of travelling to. Detailed descriptions and intelligent insights are the highlights of his writing. Towns, incidents, people, occasions—all come alive through his written word. His use of language is exact and appropriate to the subject that he is pursuing. There is nostalgia in some places but little sentimentality. He has a reporter’s eye and a succinct style. All the essential details are there but what differentiates his writing from a mere report is his story teller’s manner. He takes no sides, reserves personal judgement and is happy to attend to the facts and allow the reader to form his/her own views. He is unafraid to write about the poverty, the desperation and the apathy that he encounters. He looks for grace in the human condition and the landscape that he traverses. Jack has a close connection with India and perhaps this lends the authenticity to his work—a grandmother who was born in Meerut and a father who admired Gandhi. He also married and lived over long periods in the 1980s in the country.

Three decades of political journalism and train travel have been documented in Mofussil Junction. When Jack first arrived in Delhi in 1976, he used a portable typewriter to thump out his articles, transmitting them via unreliable telex machines back to The Sunday Times in London. He seems to have a strange affiliation to machinery and the products of the industrial revolution—printing presses, indigo and opium factories, steam ships and locomotives. His passion for these heirlooms of advancement take him deep into the interiors of India to unearth their origins and early usage. Trains figure number one on this list.

The book is a distillation of the scores of train journeys he took for work as well as for pleasure. Drinking tea in kulhads, he engages with a cross-section of Indian society. Army men on furlough, salesmen on their regular routes, professional astrologers and a host of different families are the co-travellers in his compartment. Sharing intimate conversations and Gold Flake cigarettes, he develops ‘one night friendships’ as he terms them. In the article ‘Night Trains’, he attempts to sum up these myriad experiences collected on the tracks, both broad gauge and meter gauge and notes the degeneration in the services of the railways. While travelling in a first class AC coupe in 2008, he observes the run down condition of his surroundings and the Americanization of the service staff, who in their striped shirts and baseball caps seem better attired to serve at fast food outlets rather than on an Indian train.

Many such observations enrich the book and the reader will embark on a wonderful and illuminating journey through India along with the writer. My own, has been a most memorable one!

Stuti Kuthiala is with the Department of English, The Doon School, Dehra Dun.