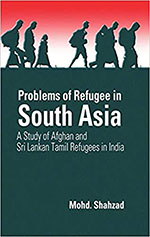 Euriphides once remarked, ‘There is no greater sorrow on earth than the loss of one’s native land.’ It does not augur well for today’s modern civilized world that a whopping number of people are born and die in refugee camps, and millions of people each year are forced to leave their countries and seek refuge in other countries, while many others are displaced within their own countries. The book Problems of Refugee in South Asia: A Study of Afghan and Sri Lankan Tamil Refugees in India is a critical evaluation of refugee problems in a comparative sense. Divided into eight chapters the book in its prologue argues that people’s involuntary migration is not a new phenomenon, rather it commenced from ancient times. However, refugees only became an important international matter in the aftermath of the creation of the new state system in the seventeenth century in Europe. The Peace of Westphalia (1648), for instance, identified refugees as people who had lost the protection of their own state, and recognized the importance of offering asylum to at least some of the world’s refugees. This work is an endeavour to understand the concept of migration in the world’s prominent religions by focusing more on European perspective on migration in a historical context. The League of Nations and the Geneva Convention (1951), and its 1967 Protocol in this regard have protected refugees after the First World War throughout the globe. There is a genuine attempt to highlight the role of regional instruments such as the Organization of African Union (OAU), and the Asian-African Consultative Organization (AALCO) in protecting refugees by promoting the principals of regional integration.