Reaching Out to Africa 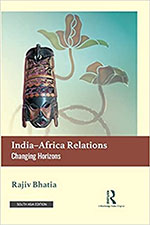 The publication of two important books on India-Africa relations in early 2022 is a striking event. The authors are Foreign Service Africanists with multiple assignments on the Continent. They complement each other rather well.

Rajiv Bhatia addresses the wide historical canvas, and a range of political and other connections. His key message: ‘Africa’s leadership and elites need to shoulder the primary responsibility… But the world too has a special responsibility to assist Africa… Mutuality of interest (for India) dictates a deeper partnership’ (p. 11).

Sketching the historic India-Africa links, the author notes that by 2002 there were 2.6 million Indians in Africa. They were mainly descendants of indentured labour taken in colonial times, and were for the great part African citizens or held other nationalities. The number of recent migrants is smaller, mainly professionals and businessmen. Chapters three, four, five—‘Africa, Dancing with Global Actors’, ‘Africa-China Tango’ and  ‘‘India-Africa Engagement in the 21st Century’ examine how world powers engaged with Africa, followed by a close study of the actions of China and India. Was there really a ‘scramble’ for the Continent? Africa’s mineral, forestry, other resources, actual and potential, ought to have produced a stronger push in our times. Clearly, China has been driven by a strategy and long-term vision, after the series of nine China-Africa ‘FOCAC’ conferences, commencing October 2000. India’s efforts, in the shape of three India-Africa Summits between 2008 and 2015, have been persistent, but not quite comparable, partly owing to India’s lower stock of investable funds, besides a less-than-fulsome response from Indian business. Closely examining India-Africa actions of 2000-19, the author concludes that while political relations were ‘closer and warmer’, both the economic pillar and people-to-people ties needed strengthening, more attention. He concludes that close ties should translate into economic and other mutually beneficial activities.

A block of four chapters—‘Continental Dimensions’, ‘Regional Dimensions’, ‘Bilateral Aspects’,  ‘Sociocultural and People -related Bonds’—looks at the Africa-India bilateral dimension in detail, with the final two chapters providing the conclusion. My takeaway—1)Trade growth took place in the period 2000 to 2011, with exports rising from $2.3 billion to $24 billion, but after a peak of $31 billion in 2014, they stagnated, part of the wider story of Indian merchandise exports in that decade. The flow of Indian FDI also slowed. 2) The 3rd India-Africa Summit in New Delhi in October 2015 drew 41 of the Continent’s 54 leaders, heads of state or government, with announcements ($10B in concessional credits, $600 million in grants, 10,000 ITEC scholarships per year, duty free access for African exports). But it did not address the core issue of slow project implementation. 3) The creation of the ‘Development Partnership Administration’ in 2012, as MEA’s single agency for aid projects has improved outcomes. The 2018 decision to expand the number of Indian embassies from 29 to 46, under implementation, underscores a strong commitment.

Despite good intentions, our project delivery system falters. Neither high-level visits, nor project announcements suffice in themselves, without ground actions. As for scholarships and technical cooperation fellowships for Africans, our terms are usually not sufficiently attractive. Implementation remains the bugbear.

Bhatia’s approach is strongly analytical. He looks at current events in a historical context. He writes, for instance, about NEPAD and APRM, both of which are purely African actions aimed at voluntary, discreet actions for improving domestic governance in fellow-African states, through persuasion. They seldom attract international attention. Overall, this book provides a deep dive into India’s connections with Africa across a wide spectrum. The statistical data is a key attraction of the book. He gently points to the problem areas, without making a mountain of this. The overall tone is positive. 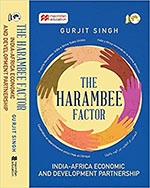 Gurjit Singh’s Harambee Factor, produced in collaboration with the Indian Council of World Affairs, is focused on economic and developmental cooperation. The longer of the two works, it mostly eschews comparison with China or Africa’s other partners. Consider the new issues he brings to the table.

In the past 15 years Africa’s GDP has tripled. Its current population of 1.2 billion may grow to 2.5 billion in 2050 (though recent evidence suggests that growth may slow dramatically; see India’s 2021 sample survey reports on the drop in the ‘total fertility rate’).

Singh has used his own surveys of businessmen and policy makers in India and Africa to bolster his thesis. The African Union played a key role in the first 2008 India Africa summit, under the Banjul formula, which limited participation to 15 states. African ambassadors in Delhi wanted a larger role, but were frozen out by their own colleagues at the AU headquarters. The African Union operates as an additional layer for initial decisions on projects and location, partly on the basis of regional weightage, balancing opportunities for all. This can lead to selection of unsuitable locations, loss of momentum for the project, or even low interest from the receiving state. It becomes a classic tension between the bilateral and the group or regional process. The project recipient may not have the capacity for the project. For a civil aviation academy, Indian experts felt that the designated location simply did not have the needed infrastructure. A key issue: is it better for India to mainly work bilaterally? One is left with the impression that it is the bilateral track that works best, even while the AU is vital, especially for our multilateral objectives.

Capacity building has always been a strong Indian pillar, i.e., training in India, via the successful ITEC programme dating to 1964, plus institution-building in Africa. First, in 2015 the number of training places offered to Africa was raised to 10,000, but there are difficulties in filling these up. The financial terms appear increasingly unattractive. Over the years, they have improved, but not to a sufficient degree. Second, institution-building in Africa. This has involved setting up vocational training institutes, as well as human settlement institutes, focused on low-cost housing. Third, the CV Raman Fellowships in science and technology have become a very successful programme that has reached out to some 200 PhD and Masters researchers. A point not covered: new generations of Indian researchers, through their field visits to African countries, are now building new epistemic communities of shared learning.This is long-term Indian strength.

Project execution remains a bugbear for development aid the world over. Delays are built into both ends of the transaction. African challenges in this area are well documented. At the Indian end, the executing ministry often gets blocked in its internal project processing, despite having carried out that same procedure when the project was initially approved.

The lines of credit extended by India have helped in promoting Indian projects in Africa, but our procedures become a limiting factor. The net result is a mix of success stories and setbacks, and it seems impossible to speed-up our procedures. Often, the biggest Indian players are absent from the projects. On the flipside, agile newcomers are willing to invest effort and time into building local connections across Africa to secure projects. The story of FDI outflows from India into Africa is one of mixed success, but clearly many Indian companies are averse to  the effort and risks involved. Tatas, L&T and ONGC and some pharma groups are among the exceptions. We thus end up with the half-full glass; much more needs to be done to unify our Africa connections for mutually beneficial results. Yet, ‘we see the role of the Indian private sector as adventurous, using simple business practises and frugal methods’ (p. 355).

Another significant conclusion is that the process of managing aid flows remains complicated despite efforts by the Development Partnership Administration, for a ‘whole of government’ actions. Often, functional ministries apply the same set of financial regulations in different ways, even though they are all part of the unified system, through what is called in ministries ‘associated finance’, run entirely by the Finance Ministry.

Singh’s exhaustive analysis leads to important conclusions in his final two chapters. First, Indian lines of credit (LoCs) have helped with FDI flows and project exports in countries like Mozambique, but equally countries that don’t qualify, like South Africa, Egypt and Morocco have also been major FDI destinations. Second, exports show a clear link with LoCs, and India has done well in this area across much of Africa. Third, technical training remains vital to  extending India’s influence. But institution building has not been as successful as intended. Fourth, in contrast, social organizations have produced important popular impact, but do not show large economic results. Finally, the Indian private sector is now playing a bigger role in Africa than ever before. It faces problems, but we also see its determination to overcome challenges. The author concludes with recommending ‘strategic financing with  larger amount of grants and lower cost loans, together with private investments’ (p. 405).

Both the books agree on several points. Trilateral funding is an idea that needs to be pursued more vigorously. This can involve working with European companies, with the support of their governments. Both also recommend continuing focus on human resource development, which has always been a strong point. Another key element is an FDI-led approach engagement with Africa. We can expect good outcomes from an expanding footprint, with new embassies opening across the Continent.

These books are a valuable resource for researchers, and for the serious reader.