How Truth Unfolds: The Documentary 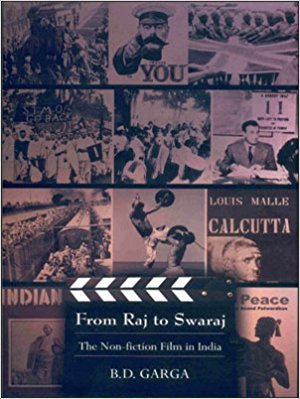 One may have heard most of it before, even seen most of it before, but this attempt to track the highlights of the non-fiction film in India is very valuable—both as a record of developments that have taken place as well as the future of the genre in the time of television. B.D. Garga’s first documentary Storm over Kashmir was followed by some fifty documentary films. The fact that he worked with various film units in Europe and at the Mosfilm studios, Moscow, and his serving as a delegate on the UNESCO committee on ‘The History of World Cinema’ as well as serving as a member of the Film Advisory Board and receiving the first V. Shantaram Award for Life-time Achievement (for documentary films) at the Mumbai International Film Festival, eminently equips him for writing this book.

Moreover, as Garga is also a founder member of the National Film Archives of India, From Raj to Swaraj: The Non-Fiction Film in India is an insider’s view of the evolution of the documentary film in India. As he says of himself ‘although my working life has run on two parallel tracks—making films and writing on cinema…’ it was only when, in 1980, he received the records of the Film Advisory Board (1940-42) from J.B.H. Wadia as a surprise gift, that he decided to attempt writing this book. He had already used some of this material in a set of articles he wrote on the same subject for the National Film Development Corporation Journal’s Cinema in India. Garga also delved into the India Office Collection of the British Library in London for valuable records. He also collected data from London’s Imperial War Museum’s collection of Indian newsreels and documentaries.

Garga’s musings on the future of documentary in India at the time of television, on whether the documentary has a future, is that it should ‘think of itself as a distinct genre regardless of the time frame … the content must determine the duration of a film, not the other way round.’

Garga’s view is that the documentary certainly has a future if it can fight the battle on the same turf as the fiction film. He mentions Fahrenheit 911 (2004) as proof that the documentary can even manage box office takings, for example the U.S. takings of Michael Moore’s film for the first six weeks amounted to more than $ 100 m. He also mentions Anand Patwardhan’s War and Peace as being screened at two multiplexes in Mumbai, something unheard of earlier.

In his chapter called the ‘Kingdom of Shadows’ (one of the best in the book) he describes in fascinating detail Charles Urban’s filming of The Delhi Durbar:

Urban was the object of intense jealousy (when he arrived in India in December 1911) among rival film crews for his colour process and rumours were rife that they intended to steal his negatives. A guard of British troops was stationed around the tent where Urban developed his film. A pit was dug under the tent and there the negatives were buried and covered by a rug over which stood Urban’s bed.

Further on in the chapter, Garga points out some other interesting facts when he describes how British filmmakers worked continuously without resting on a Sunday and had 3,000 lbs of ice with seven full pankhas blowing through to keep their rooms cool! Even at that time, the author points out, the bottom line in newsreels was that speed was of the essence and time was literally money.

In his chapter ‘The Empire Needs You’ he touches on a crucial concern of the documentary film when he discusses Urban’s film The Battle of the Somme. Apparently when it was screened, people in the audience screamed out ‘Oh god, they’re dead!’ His point being that notwithstanding the impact of its realism the shots were faked and filmed quite separately from the actual battle. He points out how due to the war effort and the use of propaganda, ‘fakery’ in films was to become legitimized.

In subsequent chapters, particularly ‘Winds of Change’ he talks of the death of the newsreel and the role of the Films Division, providing insights and throwing light on various aspects (good and bad) of the Films Division itself. His writing style while being erudite is readable enough, with various anecdotes thrown in to make it lively.

Garga’s last chapter ‘Dissent and Dissonance’ traces developments from the mid-1970s onwards, particularly from what he calls the ‘long, dark night of the Emergency’. He then attempts a brief survey of major documentaries and their makers such as Suhashini Mulay’s An Indian Story (1981) about the notorious Bhagalpur blindings, as well as numerous others amounting to a virtual roll-call of various significant documentarists. And of course he mentions the group of women film makers of the Media Storm Group who made socio-political films about women. He then focuses on Anand Patwardhan’s many films and how they have been a cause of annoyance to the authorities and routinely subjected to censorship. After talking about the emergence of the Mumbai International Film Festival he ends both the chapter and the book by describing how as many as 275 filmmakers organized a parallel film festival called VIKLAP—Films for Freedom. His final sentence says it all—‘in times of danger and madness, voices of reason are voices of dissent.’

As a compendium charting the history of the non-fiction film in India, Garga’s forte really lies in the nuanced and detailed delineation of the early days of the genre during the British period. Surprisingly, the Public Service Broadcasting Trust and the numerous award winning documentaries it has commissioned and the large pool of independent film makers it has nurtured over recent years, does not even come in for a mention. Otherwise, this book serves as an important contribution to film studies both for the film buff and the film scholar.

Divya Raina studied documentary film at the New School for Social Research, New York. She is both a media practitioner and teacher of media/film studies.