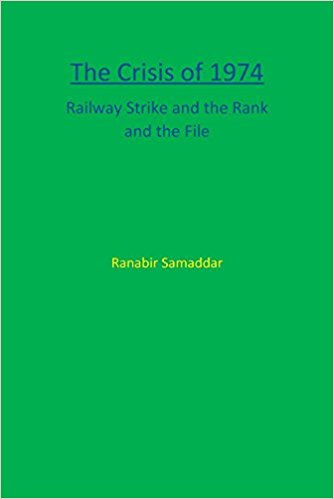 May, 1974 in India was a time of fervent activity and excitement. The air was rife with talk of an impending All India General ‘Railway Strike’. The strike was due to start on 8th May, 1974 and both the state and the railway unions braced for the event. The railway unions sought to organize themselves under an umbrella organization called the National Committee for Railwaymen’s Struggle (NCCRS). The demands of the Railway men revolved around notions of bonus, wages, working conditions, the need to define work hours, safety standards, the right of all railway men to be treated as industrial workers with trade union rights including the right to negotiate and other such demands.

Ranabir Samaddar’s fine book The Crisis of 1974: Railway Strike and the Rank and File deals with the dynamics surrounding the Railway strike, especially the rank and file who according to him were singularly responsible for lending the strike an air of extreme militancy. Samaddar argues that the ‘Ralilway Strike’ of 1974 portended a revolutionary crisis in the state structure. The Indian State had been lurching from one crisis to another since the late 1960s.