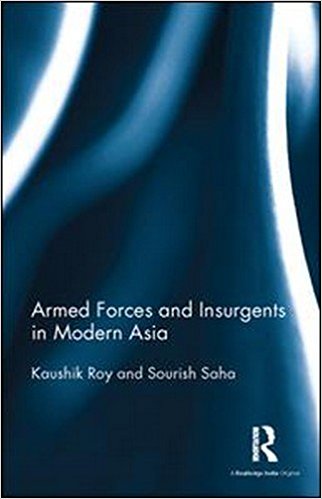 The book is a product of collaboration between an unlikely duo: a history professor at Jadavpur University and a bio-statistical consultant for pharmaceutical companies based in the US. It began in a conversation over coffee at Kolkata’s Park Street in which the two discussed governance, poverty and armed rebellions in India, with the discussion expanding to include comparisons and contrasts with the experience of insurgency and counter-insurgency across the globe. In the event, the two restricted the scope of the book that emerged to Asia. They intended the book as a ‘sort of reference book for researchers’ (p. vii). The bibliography at its end covering 19 pages makes this claim plausible.

Professor Kaushik Roy’s academic contribution to Indian military history has included many works of considerable length and depth over the past decade. While the division of labour between the two authors is not known, the book’s introduction bears an academic’s stamp in its synthesis of thinking on insurgencies and their counter. Thoughts on rebellion ranging from Clausewitz to Mao and counter-insurgency thinking from Kitson to Kilcullen are touched upon. It is a sound background chapter on which to base the rest of the book, backed as it is by 82 footnotes citing the well regarded sources on the subject.