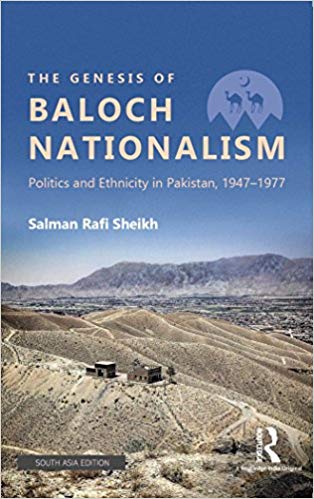 Salman Rafi’s book is an essential piece of work for those who are interested in understanding the history of Baloch nationalism in Pakistan. Although Rafi analyses the future contours of the movement in the last chapter, major portions of the book document the evolution of the politico-ethnic struggle in Balochistan in post-Partition Pakistan. This work forces the readers to think critically about multifarious complexities attached to the Baloch issue, the most important of which is understanding the genesis of the conflict.

Rafi meticulously deals with the subject by exploring the unexplored through multiple government and non-government sources. Detailed end notes and the ‘appendices’ section prove the author’s efficiency in carefully demonstrating the ‘grey’ side of Baloch nationalism. The timing of the book is crucial too as the Baloch secessionist movement has gained some momentum in the last couple of years since Balochistan became an important part of China’s Belt and Road Initiative (BRI). The influx of workers from other provinces in Pakistan—Punjab, Sindh and Khyber Pakhtunkhwa—and China have raised suspicions and further increased insecurities among the local Baloch population.

There is too much at stake in Balochistan now. Huge mineral reserves, energy resources, borders with two Islamic countries—Iran and Afghanistan—and a long coastline make Balochistan a highly strategic location and a lucrative business destination for the foreign investors. As demonstrated in the book, most of these features provided the state of Pakistan reasons to forcefully annex Balochistan in 1948. In the present situation, the growing Chinese presence in the province can be seen as a possible reminder of the 1948 annexation.