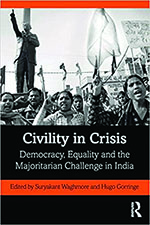 We can extrapolate from the title of the book that civility in India is in serious jeopardy. Despite the fact that majoritarian politics and democracy in India are in place, the book discusses the challenges of ensuring civility for its population. Each chapter delves into this duality and critically assesses the obstacles and problems with democracy by looking at caste and civility in the context of several Indian States. The editors’ overview focuses on the  Indian paradox of ‘high democracy and low civility’. The authors of the eight chapters question the top-down approach and acknowledge the bottom-up campaign for civility. In his Afterword, Ramesh Bairy is quite critical, pointing out problems in prior works on the concept of civility in the Indian context, while providing pointers for additional research and engagement with this subject.

‘Rural Civilities: Caste, Gender and Public Life in Kerala’ by Sharika Thiranagama is based on the author’s anthropological investigation in a few villages in Kerala, where she states that in most regions of India, caste and gender, as well as their interrelationships, essentially influence people’s social and public connections, and Kerala is no different in this regard. The author competently tackles the theme of space, public and private duality in relation to caste and gender in the first two sections of the chapter. She critically explains how the ruling castes claim the universal public while marginalized groups like the Dalits, Muslims, tribes, women, and others are labelled as separate and refused access to the ‘universal public space’. Although this segment is discussed within the framework of the chapter, it has become needlessly long and difficult to follow at times. However, the investigation of the subject through first-hand knowledge from the field, on the other hand, is a constructive component of this chapter. The author critically examines the so-called progressive nature of Kerala’s Communist radical politics, which has been claiming that Kerala’s developmental state and its public culture (p. 13) are the result of social and political mobilization on the basis of ‘class’ rather than ‘caste’. Through her ethnographic investigation in rural parts of Kerala’s Palakkad district, Thiranagama cleverly and rationally falsifies this assertion and deconstructs its reality, demonstrating that caste is still a fundamental component in people’s social, cultural, and political relationships; she calls this space ‘private-public’.

‘The Christian Conundrum: Minority Citizens and the Incivility of Caste’ by Rowena Robinson is crucial from the point of view of comprehending caste within the Christian and the incivility faced by Dalit Christians at the hands of the State and upper caste elite. To offer background, the author provides extensive conceptual clarity on ‘civil society’ and ‘civility’.  She contends that the western concept of civility, which she defines as merely ‘polite behaviour’, ‘etiquettes’, and ‘social conformism’, with the one that is crucial in claiming ‘dignity’, ‘democracy’, and ‘social justice’ for marginalized groups. She asserts that these are the important indicators of civility while thinking from the standpoint of Dalits.