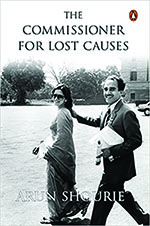 Ram Nath Goenka was the publisher of The Indian Express. Arun Shourie was twice its editor. The two were the Dhoni and Jadeja of Indian journalism in the 1980s. It was a truly extraordinary partnership.

In 1990 RNG, as he was known, passed away. I was asked to write his obituary by the paper I was working for then. It was quite an honour. Now I have been asked to write a review of Arun Shourie’s book on his years as a journalist. That too is an honour because Mr Shourie was my Editor for nearly three years and because he introduced me to modern Indian history.

RNG and Shourie both came into my life on the same day, on February 28, 1987. I was 36 years old and the Assistant Editor responsible for writing editorials and articles on economics and business. It was Budget Day and we watched Prannoy Roy, now the owner of NDTV and Ashok Lahiri, now a BJP MLA and always an economist, analyse it on the TV in the editor’s room. The editor was Shourie’s brother-in-law, Suman Dubey, who was also a close friend of the then Prime Minister, Rajiv Gandhi.

Before that day I had only heard of and read Shourie’s devastating articles in The Indian Express, which was owned by RNG. A few months later Suman Dubey had resigned as Editor and Shourie had been appointed in his place. This was his second stint at the Express. Earlier from 1980 to 1982 he had been the Executive Editor, which means he wasn’t the boss. This time he was. Or so he thought. He forgot that the real boss was RNG who reminded him by sacking him a second time in 1990. Shourie tells that story with a twinkle in his eyes.

It was my good fortune that I was one of the four or five editors who met every day in the editor’s room to decide on the editorials. Thus, even though I was not directly involved in the news side of things, I had a ringside view of how Shourie ran the paper, especially during the two and a half years of the Bofors scandal and saga. In this book Shourie recounts long-forgotten tales of perfidious politicians and goofy governments.

If some OTT channel wants to invest, each story can be made into an episode. That’s how rich the seam is. If the serial is ever made, let’s say with ten episodes, the Bofors saga would occupy four to five of the ten. It just went on and on over two and half years. Shourie gives a blow-by-blow account. His emotional involvement was so great that the several chapters he has devoted to it can become a little tedious for the lay reader, especially thirty-five years on. But for those of us who were at the Express then it’s what they call a ‘journey down memory lane’. We basked in reflected glory. And I am grateful to him for mentioning me in the book in the Bofors context. But it’s a pity that the book comes three decades after the events described in the book. No one born after 1970 would have any resonance with them. This is a book for ageing journalists.