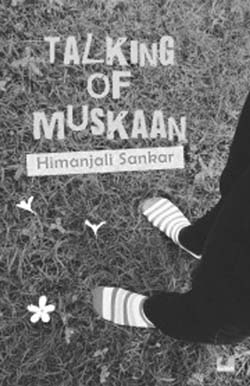 I’d already heard many good things about Himanjali Sankar’s young adult novel Talking of Muskaan, so I was really looking forward to reading the book. And I was far from disappointed. This is a bold novel in more ways than one. It is also one of the few Indian books for young adults I’ve read that isn’t imitative, has protagonists who come across as real with all the vulnerabilities and insecurities of their youth, and addresses growing up issues with a lightness of touch that doesn’t take away from the seriousness of the story. Given the current political climate in the country, Duckbill deserve applause for bringing out a book like this which talks about Section 377 without beating around the bush.

The story opens with the news of Muskaan’s attempt to kill herself. Why did Muskaan do such a thing? We see the story unravel through the eyes of her classmates—Aaliya, Prateek, and Subhojoy. Fifteen-year-old Muskaan is lesbian. She’s known it for a while now but she no longer wants to keep it a secret. It’s becoming more and more obvious to those around her anyway. How do her friends and family react to this? What makes Muskaan take such an extreme step? The book talks about attraction and sexualities with a lot of sensitivity and courage—it addresses many of the questions that young people might have on the subject with subtlety and skill. For example, while Muskaan is clear about her sexual orientation, Aaliya is more ambivalent about hers—she is still figuring things out and is uncomfortable with labels.
Since the book is about why Muskaan tried to commit suicide, we only hear of events and happenings that are relevant to this incident. And yet, Himanjali has managed to weave in many growing up issues into the narrative—friendships, classroom politics, class differences, adolescent crushes, boyfriend-girlfriend problems, depression, parental pressure, the allure of social media and more. The story moves along at a deft pace and doesn’t bother with details and descriptions that are not immediately significant to the story. These are first person accounts, after all, and so, it seems only natural that the narration should remain stark. The characters emerge as real people and Himanjali has thankfully not made them appear ‘kewl’ just because they are adolescents! If I have a quibble, it is that Subhojoy, who comes from a poor family, sounds too much like a poor-
little-poor-boy. Almost everything he does and says is coloured by the fact that he’s not from a wealthy family like the others. While this is an understandable obsession, I wish I’d got to know more about him.
There are no heroes or villains in the book, although it is pretty clear who Himanjali wants her readers to root for. This is done cleverly without the tone ever becoming judgmental. The adults in the book appear in the margins, saying and doing the adult things that they are wont to say and do. They are almost caricatures but this seems appropriate, given that we meet them through their
offspring!
The cover design by Ayushi Saxena (photo by Sayoni Basu) deserves praise. It’s simple and yet layered when you understand what the book is about. I wonder, though, how many schools and parents would be open-minded enough to pick up a book like this for their children? It might be a good idea to ban this book—then the
young people are likely to obtain a copy by hook or by crook themselves!

Sowmya Rajendran writes books for children across age-groups, from picture books for the little ones to young adult fiction. She lives in Pune.