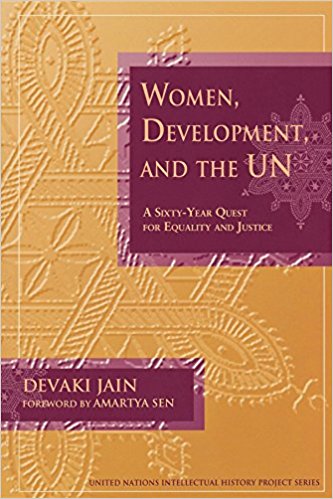 In his Foreword Professor Amartya Sen has rightly celebrated Devaki Jain’s refusal to take up the theme of her book in a minimalist framework of a tedious chronological regurgitation of what Charles Dickens would call ‘facts, facts and facts’. Instead, we have been offered a rich narrative of development, a history of women’s movement worldwide, its dreams, challenges and fissures, bringing alive a distant policy-making body like the United Nations, jiving with development refracted through the world’s women. The task, as Professor Sen points out, was an onerous one and one, moreover, made more so by the stringent standards set by the author herself. The issues were never allowed to be oversimplified, nor did the massive amount of primary data uncovered permitted to clog the flow of the argument. The expectations of readability raised in the Foreword is not allowed to flag for a moment. The author has used her vast expertise in the area to the best of advantages. This has got interestingly translated in the way the sixty-year trajectory has been mapped.The Introduction tries to capture an overview of the terrain, without, if I may say so, spoiling the sense of discovery that each successive slot has in store for us.