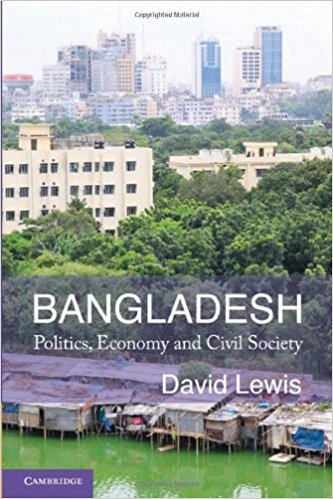 As Bangladesh approached, and successfully crossed the 40-year milestone of its existence as an independent country, several non-Bangladeshi and expatriate-Bangladeshi authors have written comprehensively about this nation. Willem van Schendel wrote A History of Bangladesh in 2009 and S. Mahmud Ali wrote Understanding Bangladesh in 2010. And in 2011, David Lewis has written Bangladesh: Politics, Economy and Civil Society. These books do contribute towards overcoming the much-in-evidence information-gap about Bangladesh that exists outside South Asia. They are also a tribute to the increasing interest in Bangladesh that has resulted from its successes on several fronts.

Considering the clichéd views the West has traditionally held about Bangladesh, it is not surprising that almost the first reassurance David Lewis gives to his readers is that Bangladesh should no longer be considered a ‘regularly “failing” State’1.

The introductory write-up (prior to the title page) also describes the book as offering ‘an important corrective to the view of Bangladesh as a failed State’. Once again in the concluding chapter the author says that ‘it has become common to refer to Bangladesh as a failing State…’2. It redounds to Bangladesh’s credit that scholars like David Lewis, Professor of Social Policy at the London School of Economics and Political Science, who has spent two decades and more studying Bangladesh, has accepted the importance of bringing in this corrective through his 200-page bird’s eye view of the nation’s history, economy and contemporary politics. In his own words ‘an important aim of this book is to argue the case for Bangladesh’s importance, not only for its inhabitants and neighbours but also for the wider global community as a whole’3.

The author seeks to explain the importance of Bangladesh, but this is largely from a western, non-South Asian perspective. He lists, in order of priority, Bangladesh’s importance as an emerging economy (they are now listed in the ‘Next 11’ after the BRICS economies) with valuable natural resources, particularly gas and coal reserves; as an ‘important focus for the international development industry’ in terms of the foreign aid it receives; as the ‘third most populous Muslim majority country in the world…a moderate majority Muslim democratic country…often favorably contrasted with Pakistan because it has maintained a reputation as a relatively tolerant society’4; and finally, as a nation facing serious environmental challenges, notably through the potentially adverse impact of climate-change related issues like sea-level rise.

These issues are relevant and significant in their own right, but the picture seems incomplete without bringing in the geo-strategic significance of Bangladesh’s role in South Asia, including as a member of SAARC and BIMSTEC. There are three aspects to the issues linked with regional cooperation in South Asia. First, the strong potential and promise of economic growth held out by pursuing regional cooperation and connectivity in South Asia is being increasingly accepted by individual countries of the subcontinent. Second, the reality is that without developing such regional cooperation and connectivity, no country in South Asia, not even India, can achieve anywhere near its full potential for economic growth and prosperity. And third, inclusive growth and prosperity within and across South Asia is the much-needed antidote for internal divisiveness, extremist violence and political instability that we see in many nations of this region, including Bangladesh.

David Lewis’s analysis of Bangladesh would have been more complete if he had highlighted the role and significance of regional cooperation. Bangladesh is a dynamic member of SAARC, and hosts the Secretariat for BIMSTEC. The geographic location of Bangladesh makes it the natural logistics and transport hub for the sub-region comprising North East India and West Bengal, Bhutan, Nepal, Myanmar and Bangla-desh. Bangladesh can serve as the bridge-nation linking South and South East Asia. The people of Bangladesh value their regional and sub-regional identities. Successive governments in Bangla-desh have been more comfortable deciding on sensitive issues, including counter-terrorism measures, connectivity and river-water sharing, on a regional rather than bilateral basis. The book under review has no mention of either BIMSTEC or Myanmar, and only a passing reference to SAARC. There is a section on ‘Globalisation’ (p. 129), and two sections on ‘Bangladesh and the International Economy’ (pp. 148 and 153 respectively). The second of these (p. 153) has a sub-heading of ‘Global and Regional Issues’, but then deals with bilateral relations, such as ‘Relations with India’ and ‘Relations with the United States and China’.

The author certainly had a daunting task, given the wide canvas of events and issues he has chosen to cover. Inevitably, some issues have not received the analytical attention they deserve, and others have been dealt with in a manner that can be considered contentious. In the latter category, one can include the role of Sheikh Mujibur Rahman as the Founding Father of Bangladesh, and the absence of any analysis of the role of non-regional powers in the Cold War dynamics that hovered over the Liberation War of Bangladesh in 1971. It is far from adequate to see the tragedy of Sheikh Mujib’s assassination in 1975 dismissed with the assessment that ‘Mujib’s efforts to occupy the political middle ground had failed, as he was first rejected by disillusioned colleagues on the left and then later discarded and swept away by the right in a coup that, in retrospect, was to provide the transition to the globally integrated western-aid influenced regime that Bangladesh was soon to become.’5

Among the issues that could have received greater attention is the entire gamut concerning religion, identity and the politics of fundamentalist and extremist groups operating in Bangladesh. The section on ‘Religion and Identity’ (pp. 25 to 29) does highlight several important issues. Notably, it brings out Sheikh Mujib’s understanding of secularism or dharma-nirapekshata, not as the absence of religion, but as the State being neutral in religious matters. Sheikh Mujib is quoted as saying that their ‘only objection is that nobody will be allowed to use religion as a political weapon’6. From such lofty beginnings, the situation in Bangladesh has deteriorated so much that by 2004, analysts like Ali Riaz ‘began to ask whether Bangladesh was at risk of becoming a Taliban-style state’7. David Lewis has correctly linked this deterioration to the period (2001-2006), which coincided with the post-9/11 situation worldwide, when the BNP came to power in Bangladesh in a coalition with the Jama’at-e-Islami and other Islamist parties.

Unfortunately, however, the author does not contemporarize this debate by analysing whether the situation improved under the Army-backed Caretaker Government (2007-08) and subsequently, with the massive mandate received by the Awami League Government led by Sheikh Hasina (2009 to-date). Public support in Bangladesh for the on-going War Crimes Trials is a strong indicator of the nationalist and secular sentiments prevalent across the nation. Bangladesh’s economic development and transformation and the best use of its population, natural resources and environment as well as the situation regarding its minorities—discussed by the author—will crucially depend on whether the State and the people are able to work together in establishing the national identity which successfully maintains the right balance between religion and culture.

Finally, I do not agree with the conclusion that Bangladesh remains, ‘a state in the making’8. Over the last 40 years Bangladesh has acquired the major attributes of a Nation State. As a Nation, it has successfully forged its national identity, based on its unique characteristics of history, culture, language and religion. As a State, it has, in keeping with its Constitution, evolved democratic institutions that shape its legislature, executive and judiciary, combined with a dynamic and fairly free media, both print and electronic. The Nation State receives its legitimacy from the people through regular elections, which have been recognized as being, on the whole, free and fair. In return, the people of Bangladesh expect a well-administered society focused on protecting the security and well-being of its citizens, combined with inclusive economic growth assuring stability, development and prosperity for all. Repeated disappointments have arisen, not as the result of any structural defects in the construction of the Nation State in Bangladesh, but because of poor governance and abysmally poor implementation of political and executive decisions. In South Asia and across the world, the people of Bangladesh are by no means alone in having to face the bitter consequences of poor governance. Perhaps the peoples of South Asia need to discuss their experiences and exchange best practices on how to ensure a more responsive polity.