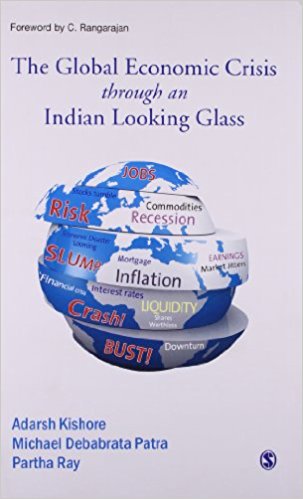 Genesis and Responses
Sukanya Natarajan
THE GLOBAL ECONOMICS CRISIS THROUGH AN INDIAN LOOKING GLASS by Adarsh Kishore Sage Publications, 2012, 318 pp., 795
May 2012, volume 36, No 5

Crisis is an output of change; it is a new beckoning or a long awaited demise, a decisive break with the past arrangements. Global crises have happened more than once in the past and they are likely to happen again in the future. It is hoped that by under-standing the mistakes of the past we will be able to prevent them from occurring again in the future. There is huge explosion of writing on economic crises by economists from all parts of the world. The crisis has generated intense debate amongst academia, policy analysts, international organizations and policy makers dumping an enormous amount of literature to analyse and prevent their recurrence.The subprime crisis broke out in August 2007 and until September 2008 was viewed within the orbit of developed countries such as the US, UK and other G7 countries resulting in a growth contraction to unprecedented levels. This metastasized into a global financial crisis in September 2008 when the largest bankruptcy in the US history was filed by Lehman Brothers following which world output fell in over six decades and so did international trade. Signs of a rapid decline in the world economy were evident as trade flows dropped low and production fell flat, initially in the developed economies and then spread onto developing countries.