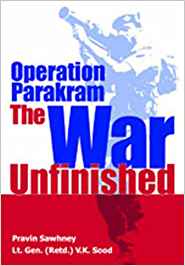 It was once said that “war was too serious a business to be left to Generals”. But after reading this book by Lt. Gen. V.K. Sood and Pravin Sawhney, I am convinced; it is even more dangerous, when matters of war and peace are left to India’s incompetent politicians! When India mobilized its armed forces for a possible war against Pakistan following the attack on the Indian Parliament in December 2001, many of us had expected a few surgical strikes against terrorist camps in Pakistan to convey the message that India’s patience with Pakistan’s sponsorship of cross border terrorism had finally run out. But nothing happened, except considerable speculation at various levels. And then as the general mobilization of India’s armed forces continued unabated, there was talk of a full scale war, with Pakistan threatening a nuclear response that sent alarm bells ringing in Washington and other western capitals. And then, despite the then army Chief General Padmanabhan’s statement (that must have been made after due political approval) following Kaluchak massacre in May 2002 that “the time had come for India to act”, nothing happened.

Military mobilization was complete and the media had gone through the paces of how various operational scenarios could possibly unfold in the event of an India Pakistan war, but even then, nothing happened. The book explains in detail why India was unable to catch the bull by its horns.

Few books in recent memory have gone into such detail about the respective military capabilities of India and Pakistan, the equipment that either side possess and a detailed and logical analysis of what is truly the fighting potential of either country. For those that follow the subject of India Pakistan relations, this book provides most of the answers that would otherwise be almost impossible to get. The experience of both the authors is certainly one reason for the details that the book carries. General Sood is a former Vice Chief of the Indian Army and has enormous experience of command and staff appointments at every level, while Pravin Sawhney is a former Indian Army Major, a one time print journalist, then a research scholar and is now with the Janes International Defense Review, one of the world’s most respected military publications. Between them, they have therefore produced a book that South Block would rather not have seen in print, and GHQ Islamabad would be delighted with the outcome. Because, the book is uncharitable about India’s indecisive political elite and perhaps rightly so, while claiming that Pakistan has in place a war fighting mechanism that is willing to match India, missile for missile.

Operation Parakram: The War Unfinished, centres around the much talked about “Op-Parakram”, that brought India and Pakistan to the brink of another war. It has lots of military detail that would gladden the hearts of military buffs in India and will perhaps open the eyes of Pakistan’s military establishment. But it has a few shortcomings also. First, the detailed account of the military and strategic capabilities and doctrines of both India and Pakistan, makes this a specialized document, that would appeal only to a niche readership. Those who are relatively uninformed about such issues would therefore need to read it a few times, before they can absorb it all. Secondly, there is very little if any, detail about the maritime capabilities of India and Pakistan and how the naval aspects were structured within the overall strategy of either country. For instance, India, it was believed, was willing to block Pakistan’s ports and coasts to strangle its economic and energy pipelines and that must have played seriously on Islamabad’s mind. But this aspect gets no mention. Thirdly, despite the thorough analysis about military operations and capabilities of both countries in various sectors of the Indo-Pak front line, there is no mention about the possibility of India initiating a proxy war (not necessarily a terrorist campaign) commando strikes or hot pursuit, across the Line of Control to harass and hit Pakistan’s terrorist training camps that continue to play havoc in Jammu and Kashmir. Fourthly, there are a few printer’s devils that one does not expect from a publishing house such as Sage. For instance on page 114 while talking about General Sundarji’s proposals for arms cut, the book says General Sundarji drew up the most ambitious armament plans! It should have been ‘disarmament’. And finally, while claiming—perhaps rightly so —that India’s military designs over Pakistan were repeatedly thwarted because of the considerable pressure that Washington had applied on New Delhi’s leadership on several occasions, the book lacks details on this specific matter.

However, in the final analysis, I must compliment Messers Sood and Sawhney in putting together a solid document on how New Delhi must reform its military decision-making mechanism, if India is to take its place amongst at least the emerging powers of the world. The point that the authors make is that India’s politicians waffle more than they deliver, whereas Pakistan’s military elite means every word of what it says and is ready to give India a run for its money, should the occasion arise. And as far as Mr. Vajpayee’s government’s obsession with Washington is concerned, the less said the better. Quite clearly America’s leverage over India is not because of India’s serious dependence on the U.S. for anything – unlike Pakistan which would go under without American aid – but because our politicians feel that a smile and a handshake from Washington’s elite means more than the tears and the agony of the battered Kashmiri people! In short, ‘Op-Parakram’ was a failure, whatever the explanations from South Block. The book certainly deserves to be in every thinking man’s library.

Maroof Raza is a Visiting Professor at Middlesex University, London.